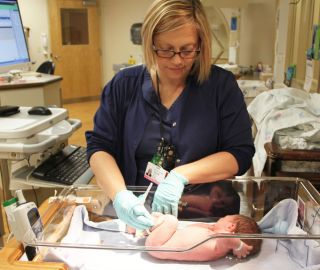 What do vitamin K and immunizations have in common? Actually, nothing — but that isn't stopping parents from refusing the lifesaving treatment when their children are born. There has been much discussion about immunizations in the past few years, and here is one dangerous unintended consequence: When parents refuse vaccines after a child's birth, they unwittingly also refuse vitamin K.

For more than half a century, giving newborn infants an injection of vitamin K within the first few hours of life has been the standard of care. Pediatricians know that vitamin K is essential for infants to be able to clot (stop bleeding), and that babies are born with very low levels of vitamin K. [As Social Ties Collapse, the Anti-Vaccine Movement Grows  ]

When the bleeding won't stop

Infants who do not receive vitamin K injections are at risk for a deadly condition: vitamin K deficiency bleeding of the newborn (VKDB). There are two types of VKDB: early onset and late onset. Early onset VKDB involves bleeding in the first few days of life, and can mean bleeding from a circumcision site or umbilical cord stump. Late-onset VKDB can occur from 4 to 12 weeks of life, and usually means internal bleeding.

My colleagues and I recently published a case study in The Journal of Emergency Medicine detailing a case involving a 10-week-old infant I treated at the emergency department at Nationwide Children's Hospital who was diagnosed with late-onset VKDB.

The baby presented with increased fussiness that had progressed over a two-week period and had experienced a full day with flecks of blood in his stool. The child appeared pale on examination. Because of this, we performed a complete blood count, finding that the red blood cell levels were very low (indicating anemia) and the blood showed no ability to clot.

We discovered that he was experiencing intracranial bleeding (bleeding that occurs within the skull), and that the parents had refused "all shots" at birth. The infant was lacking essential vitamin K and was bleeding into his brain.

In this case, we immediately administered a vitamin K shot, and within 24 hours the bleeding stopped. Follow-up scans showed there was no further internal bleeding, and his symptoms subsided. It was a close call, and presented an opportunity to remind all parents why vitamin K shots are so important.

Vitamin K is not a vaccine

I recommend that all newborns and children be vaccinated according to the guidelines set forth by the American Academy of Pediatrics (AAP). But for those parents who might be leery of vaccinations, it is important to know that the vitamin K shot is not a vaccine. It has no immune properties whatsoever and should not be lumped in with vaccines. [It's Time to Fix Outdated Vaccine Trials ]

The vitamin K injection is completely safe, and essential for all infants. All vaccines are also safe, but even the criticisms of vaccines wouldn't apply to this injection, since it contains only a vitamin. Adults get vitamin K through the foods they eat, mostly from green, leafy vegetables like kale, spinach and herbs. The problem in pregnancy is, no matter how often expectant mothers eat foods rich in vitamin K, it does not cross the placenta well. An unborn baby therefore doesn't get the benefits of vitamin K from the mother's diet.

Likewise, after birth, tests have shown that breast milk retains very little vitamin K from a mother's diet, so breastfeeding alone doesn't give infants sufficient amounts of vitamin K, either. The stomach and intestines do not absorb vitamin K well, so oral doses and formula are not as effective as the shot.

That's why all babies need an injection of this crucial vitamin immediately after they are born.

Fortunately, VKDB is rare. According to the AAP, vitamin K deficiency causes unexpected bleeding in the first week of life in 0.25 to 1.7 percent of newborns.

If internal bleeding does occur in a newborn, it can be hard to detect. Symptoms of VKDB can include increased fussiness, bruising, blood in the urine or stool, and vomiting.

Those are fairly common symptoms in newborns, however, that could point to any number of conditions, leading to misdiagnosis. The longer the symptoms persist, the worse the bleeding can become, and as parents grow concerned, they eventually seek medical attention.

That is why physicians need to be aware of how many parents opt out of their babies' vitamin K shots. The injection has been routine for so long, it might not occur to some doctors that VKDB is a possibility. Otherwise, the physician may go down a different diagnostic path, delaying treatment and increasing the risk of further damage to the infant.

As was evident in the case we treated, and in similar cases recently, a vitamin K shot or infusion given immediately after diagnosis can stop the bleeding and save the infant's life.We were lucky we caught it in time or the outcome may have been devastating. Our patient had a fortunate outcome, but we could avoid these situations entirely if all parents understood what the vitamin K shot is, knew why it's so important and allowed health care providers to give the injection to babies shortly after birth