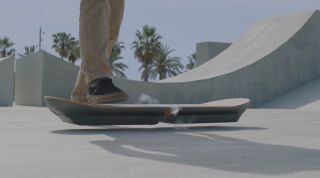 Lexus introduced its newest product, a hoverboard dubbed the "Slide," in a short video posted on YouTube.
(Image: © Lexus/Screengrab via YouTube)

Last month, Japanese auto manufacturer Lexus unveiled its newest product, and it's not another luxury SUV. It's a hoverboard.

Nicknamed the "Slide," this flying skateboard will be tested in public for the first time on Wednesday (Aug. 5), the company announced this week in a brief video posted on YouTube. The video shows the sleek board floating over what appears to be regular cement in a skateboard park, leading some hoverboard enthusiasts to speculate that, at long last, someone has produced a flying skateboard that you can actually ride in a halfpipe or down a sidewalk.

But, if you thought Lexus' new toy would turn you into Marty McFly from "Back to the Future Part II" (the one with the epic hoverboard chase scene), think again. Lexus' Slide can't actually hover over regular cement. [Hyperloop, Jetpacks & More: 9 Futuristic Transit Ideas]

The Slide uses magnetic levitation, or maglev, to keep itself (and its rider) hovering above the ground, according to the company's website, which states that the board relies on "liquid nitrogen cooled superconductors and permanent magnets" to operate.

Because it uses superconductors, which are materials that can conduct electricity with zero resistance below a certain temperature, Lexus' hoverboard is slightly different from other maglev technologies, such as the super-high-speed maglev trains in Japan, China and other countries. Maglev trains are lifted off their tracks and propelled forward by conventional electromagnets (a type of magnet with a magnetic field created by an electrical current). The electromagnets are located under the train's carriage and are repelled by other magnets embedded in the train track. The interaction between the two sets of magnets is what allows the train to defy the force of gravity and stay "afloat" in the air.

But the superconductors in Lexus' hoverboard work a bit differently. They produce a powerful electrical current when cooled to a certain temperature, and the strong electrical current that the magnet produces in turn creates a strong magnetic field that repels the magnetic field created by other magnets that might be located nearby. This repelling force is what keeps the hoverboard in the air.

What you don't see in the video Lexus posted last month are the magnets underneath the hoverboard that repel the superconductors. All you see below the board is what looks like ordinary concrete. But there may be more to that concrete than meets the eye, according to the skateboard experts at El Patín, a Spanish skateboarding website.

One of the website's contributors went over to the skate park that Lexus built in Cubelles, a municipality in Barcelona, which is where the company is allegedly going to debut the hoverboard next week. The El Patín writer said in a blog post that the park is "not exactly what it seems."

The Cubelles skate park is made from sheets of plywood and a very thin layer of concrete, according to El Patín. In other words, it's not a real skate park, but it's made to look like one.

As Lexus mentioned on its website, the hoverboard works using both superconductors and "permanent magnets." In the specially built skate park, these permanent magnets are laid out like a track and are hidden under the wood and concrete surface of the park's ramps and other surfaces, according to El Patín. This hidden track creates the illusion that the hoverboard is moving freely around the skate park, just like a regular skateboard. But really, the board can only move over the magnetic track. [9 Cool Facts About Magnets]

Its inability to hover over any surface makes Lexus' latest tech toy a bit useless to anyone who doesn’t have access to a specially magnetized skate park. However, this isn't the first time a company has built a hoverboard that can only be used in very specific locations.

In December 2014, the innovators behind the Hendo hoverboard reached their Kickstarter funding goal. But, their futuristic skateboard only works when placed over a copper surface. The Hendo hoverboard contains four electromagnets that alternate their magnetic fields and induce a repelling magnetic field in the copper surface beneath the hoverboard, Eric Palm, deputy director of the National High Magnetic Field Laboratory at Florida State University, told Live Science in December.

Hendo's hoverboard will be making its public debut at a specially created, copper-coated "hover park" in October, according to the company that created the board. So, you won't be cruising down the sidewalk on the Hendo board any time soon, either.

If you want a hoverboard that can be used in a more natural setting (i.e., anywhere other than a one-off skate park strewn with magnets or copper), then you may want to talk to Catalin Alexandru Duru, who built a prototype hoverboard that lifts off the ground using two propellers. This adventurous inventor recently made it into the Guinness Book of World Records for longest hoverboard flight when he flew his prototype board 905 feet (276 meters) across a Canadian lake.