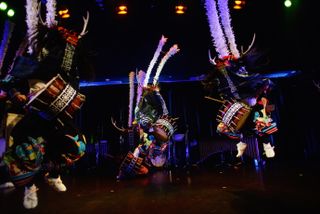 A new analysis of music from diverse cultures around the globe reveals that regardless of whether it's hip-hop or classical or alternative rock, all music shares certain universal features, such as having a simple beat. And these characteristics tend to be those that bring people together, the researchers said.

"Our findings help explain why humans make music," study researcher Thomas Currie from the University of Exeter said in a statement. "The results show that the most common features seen in music around the world relate to things that allow people to coordinate their actions, and suggest that the main function of music is to bring people together and bond social groups — it can be a kind of social glue."

Currie, along with Pat Savage, a doctoral student at the Tokyo University of the Arts, and their colleagues analyzed music from around the world, examining 304 recordings from the online Garland Encyclopedia of World Music. The music samples came from every inhabited continent, from both vocal and instrumental music, and included indigenous recordings as well as modern, studio-created music. [15 Weird Things Humans Do Every Day, and Why]

The researchers analyzed the music using a few different classification schemes. They systematically coded the features of each piece of music and employed a phylogenetic comparison system similar to those used by evolutionary biologists to classify and statistically analyze organisms. Although they found no features that were part of all the songs analyzed,  the researchers did find dozens of characteristics that were present in a majority of songs across different world regions.

Some of these characteristics were not surprising, such as the music's tendency to use discrete pitches (rather than ones that slide from one tone to the next like the way a voice rises to ask a question), and equally timed beats and short musical phrases.

Other music universals were more unexpected, like the discovery that two-beat rhythms predominate over three-beat rhythms (think of a military march compared with a waltz). "It fits that we have two legs, so the music is probably related to the natural rhythms of movement," said Savage. "And also, two is simpler than three, so maybe it's easier to process and coordinate."

The researchers also found that though a pentatonic or five-note scale is assumed to reign supreme around the world, scales are actually more complicated than that. A lot of the scales that were analyzed actually had four or six notes, though the interval structures were similar to each other. (A scale is a set of musical notes ordered by fundamental frequency or pitch.)

Men as well as bands dominate music around the world, from Papua New Guinea to the Middle East. Some people, as far back as Darwin, have believed that singing evolved as a way for males to gain mates (whale song and bird song are dominated by males). In humans, Savage said, the fact that females are less likely to be involved in music-making is likely more tied into a patriarchal cultural structure than a biological reason — something that he said requires more study.

The finding that most music happens in groups, however, points to the evolution of group bonding and social cohesion through music. Before iPods and smartphones (and before that, CDs and records), multiple people were required to bring music to life; simple repetitive beats brought people together to collaborate on one activity.

Previous studies showed that people who experience music together are more likely to rate those who listen with them as helpful or attractive. Even babies, though too young to talk, are more likely to help an experimenter after bouncing in rhythm with him or her than when they move out of sync.

Savage said that follow-up studies might compare music production across species, analyzing which features are unique to human music and which exist in birds or whales or other music-making creatures.

The research was published yesterday (June 29) in the journal Proceedings of the National Academy of Sciences.