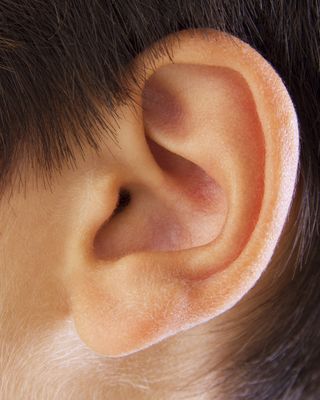 The strange shape of the outer ear is important. It modifies high-frequency sound waves entering the ear before funneling them to the middle ear.
(Image: © Dreamtime)

Dr. Darius Kohan is the chief of otology/neurotology at Lenox Hill Hospital and Manhattan Eye, Ear, and Throat Hospital in New York City. He is also an associate clinical professor of otolaryngology at NYU Langone Medical Center, the medical co-director of the Center for Communication, and a voluntary attending surgeon at New York Eye and Ear Infirmary. He contributed this article to Live Science's Expert Voices: Op-Ed & Insights.

While Thursday's U.S. Supreme Court ruling affirming the Affordable Care Act is good news for millions of Americans who receive subsidies from the program's health care exchanges, the vast majority of Americans with hearing loss will still be left with difficult choices.

Hearing aids , which amplify sounds, are widely considered the gold standard and first line treatment for hearing loss — yet fewer than one in three adults age 70 and older who could benefit from hearing aids has ever used one. This proportion is even lower among adults ages 20 to 69.

Part of the reason for the treatment gap is that Medicare, the federal health insurance program for people age 65 and older, does not cover any of the costs associated with hearing aids, routine hearing exams or fittings for hearing aids. And, for the most part, these services are not covered by other U.S. government agencies or private insurers, although there are some exceptions. The U.S. Department of Veterans Affairs (which covers military service members) and some states cover hearing aids if an employee's hearing loss is job-related. Other states cover hearing aids for children younger than 15. And some high-end private insurance companies also cover some, or all, of the costs associated with hearing aids.

However, despite those exceptions, the United States is lagging behind in this area. Many other nations — including the United Kingdom, Israel, Germany and Belgium — offer at least partial coverage for hearing aids. [Tomorrow's Wearable Tech Is Straight Out of 'Star Trek' ]

Based on standard hearing examinations, in the United States one in eight people — 13 percent, or 30 million individuals — age 12 or older has moderate to severe hearing loss, and the rates of hearing loss increase with age. Moreover, nearly 25 percent of people ages 65 to 74, and 50 percent of those age 75 and older, have "disabling" hearing loss, according to the National Institute on Deafness and Other Communication Disorders (NIDCD).

The NIDCD cites exposure to noise as a cause of hearing loss, but in my opinion, the aging of the population is driving hearing loss. People are living longer than ever before, and with advancing age comes the risk of hearing loss.

"It's a very, very sad situation, especially since hearing loss is underestimated, misunderstood and generally ignored as a real problem," adds Arlene Romoff, co-founder and past president of the Hearing Loss Association of New Jersey, and author of the books "Hear Again" and "Listening Closely."

The cost of hearing aids can be prohibitive — ranging from $1,000 to $3,500 per ear — and a lot of people with hearing loss need an aid for each ear. What's more, the devices are not meant to last a lifetime and usually must be replaced every few years. It is a dollar-and-cents issue, but it doesn't make sense.

Medicare will cover the cost of surgery to treat hearing loss, so lawmakers do consider hearing important. Otologists and other professionals who diagnose and treat hearing loss know that the wider use of hearing aids could prevent or substitute the need for surgery to treat sotosclerosis, an abnormal bone growth around the bones of the middle ear that can lead to hearing loss. Cochlear implantation would still be needed for people with profound hearing loss. What's more, hearing aids can help reduce risk of depression and isolation experienced by many with hearing loss, according to the Better Hearing Institute. Untreated hearing loss is also linked to cognitive deficits that can have devastating effects on professional and personal lives, according to a study in the Feb. 25 issue of JAMA Internal Medicine.

The stigma associated with needing a hearing aid has also prevented wider use of these quality-of-life-saving devices. Hearing aids have gotten a bad rap over the years. They were seen as intrusive, highly visible and not all that effective, but today's hearing aids are tiny (smaller than a Bluetooth device), frequency or pitch-specific and smart enough to work with a smartphone. In the future, they may even do things like monitor blood pressure, heart rate and other vital functions.

"Whether or not hearing aids are considered 'medically necessary,' they get treated differently than other medical conditions when it comes to insurance coverage because of the social and emotional stigma attached to their use," Romoff said.

Otologists and grassroots groups have been lobbying at the local, state and national levels to encourage Medicare to cover the costs associated with hearing aids and will continue to do so. Hearing is not a luxury, and hearing aids are not a lifestyle choice. It is time to make some noise about hearing loss.