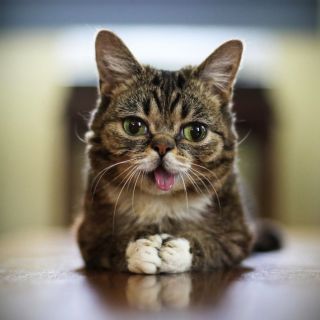 This adorable kitty, named Lil Bub, is one of the most popular cats on the Internet.
(Image: © Mike Bridavsky/www.lilbub.com)

That's right: Watching the online antics of Lil Bub, Grumpy Cat, Colonel Meow and all their kitty friends can boost your energy level, heighten your positive emotions and decrease your negative feelings, according to Jessica Gall Myrick, a media researcher at Indiana University in Bloomington.

"Some people may think watching online cat videos isn't a serious enough topic for academic research, but the fact is that it's one of the most popular uses of the Internet today," Myrick said in a statement. "If we want to better understand the effects the Internet may have on us as individuals and on society, then researchers can't ignore Internet cats anymore." [Here Kitty, Kitty: 10 Facts for Cat Lovers]

Nearly 2 million cat videos were posted to YouTube in 2014 alone, according to Myrick, who noted that these videos received almost 26 billion views. In fact, cat videos received more views per video than any of YouTube's other content categories, Myrick's research suggests.

Myrick tapped into the overwhelming popularity of cat videos to conduct the study, which relied on survey results from approximately 7,000 cat video viewers. Mike Bridavsky, an Indiana resident and the owner of Lil Bub (one of the Internet's most beloved felines), aided her in distributing the survey on social media.

Survey respondents answered questions about their cat video viewing habits across a variety of sites. (The most popular places for tuning in turned out to be YouTube, Facebook and I Can Has Cheezburger). Myrick also asked participants to describe how these videos affected their moods.

The results were overwhelmingly positive, she found. Participants said they felt more energetic and more positive after watching cat-related online media than they had before tuning in. They also reported feeling fewer negative emotions — including anxiety, annoyance and sadness — after viewing their favorite Internet cats. Many survey respondents said they viewed cat videos while at work or while studying, but Myrick found that the pleasure gleaned from watching cat videos seemed to outweigh any guilt respondents felt about procrastinating.

"Even if they are watching cat videos on YouTube to procrastinate or while they should be working, the emotional payoff may actually help people take on tough tasks afterward," Myrick said.

A study conducted in 2012 supports Myrick's findings. Researchers in Japan found that looking at images of cute animals can actually improve workers' performance on the job, increasing their attention and promoting careful behavior.

One of the questions Myrick hoped to answer with the new study was whether cat videos might be used as a kind of low-cost alternative to pet therapy, a practice in which real animals (including cats and dogs) are used to help people recover from, or cope with, various health conditions. The study didn't find any definitive evidence that cat videos are a viable alternative to in-the-flesh pet therapy, but this is one area that Myrick said should be explored going forward.

The study also helped Myrick put together a character profile of cat video aficionados. She found that only about 36 percent of participants in the study identified as "cat people." The majority (60 percent) said they like dogs just as well as cats. However, those who owned cats themselves were more likely to watch Internet videos of these fuzzy felines. Also more likely to watch cats online were those who identified with certain character traits, such as agreeableness and shyness.

The study was published online June 12 in the journal Computers in Human Behavior.