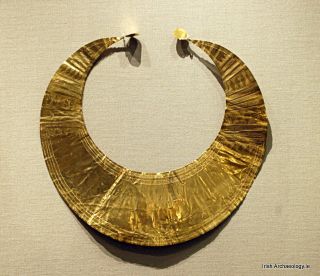 The people of ancient Ireland snubbed their local gold in favor of more exotic, mystical gold found across the sea, new research shows.

Scientists had long assumed that the gold that people in Ireland used during the early Bronze Age, about 4,000 years ago, came from nearby mineral-rich mountains. But now, extremely sensitive chemical analyses have revealed that the gold had been extracted from an area farther away, across the Irish Sea, in what's now southwestern Britain.

This is the oldest goldwork in Ireland, said Christopher Standish, lead author of the new study and a research fellow at the University of Southampton in the United Kingdom. Dating the gold artifacts, such as embossed gold armlets and gold oval plaques, can be tricky because the artifacts are often found isolated from one another, he said. [See Photos of Gold Treasures Found in Ming Dynasty Tomb]

Standish and his colleagues analyzed the lead isotopes in the gold artifacts, and compared the values to lead isotopes measured in potential sources of the gold, to determine their origin. Although the artifacts were originally collected and analyzed in the 1960s, Standish's study is the first to conduct sensitive isotope analyses on the artifacts.

Lead isotopes are produced by the radioactive decay of the uranium that is found mixed in with the gold in the artifacts. Over time, a uranium atom will break down into a lead atom, and scientists can measure the relative amounts of uranium and lead in a sample to figure out how much time has elapsed.

When Standish began his research, he thought he would find about the same number of lead isotopes in the Mourne Mountains in northwestern Ireland and the gold relics found in Ireland, he said. When the numbers didn't match, he looked to gold sources in southwestern Britain. Indeed, they matched closely, showing that the gold circulated in prehistoric Ireland did not come from Ireland.

Although there are many possible sources of gold in Ireland, evidence of Irish gold has not been found.

"It is unlikely that knowledge of how to extract gold didn't exist in Ireland, as we see large-scale exploitation of other metals," Standish said in a statement. "It is more probable that an 'exotic' origin was cherished as a key property of gold and was an important reason behind why it was imported for production."

The mysterious, foreign gold — which was often molded into circular, sunlike shapes — complements belief systems revolving sun worship, as it would have been ideal material for sacred objects, Standish told Live Science. Knowing the source of the gold could help archaeologists learn more about the religious and functional reasons for these artifacts.

Similar gold artifacts from the early Bronze Age have not yet been discovered in Britain, indicating that people there likely viewed gold as more of a commodity. The gold was likely exported from Britain and then worked up into artifacts in Ireland, Standish said. The next steps in his research will be to measure the lead isotopes of other possible sources in southwestern Britain and Wales to form a comprehensive regional picture of the different gold deposits.

The findings were described in April in the journal Proceedings of the Prehistoric Society.