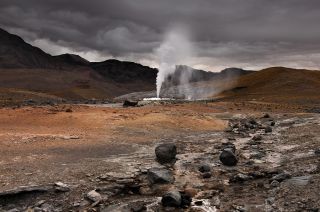 How did life on Earth begin? It's been one of modern biology's greatest mysteries: How did the chemical soup that existed on the early Earth lead to the complex molecules needed to create living, breathing organisms? Now, researchers say they've found the missing link.

Between 4.6 billion and 4.0 billion years ago, there was probably no life on Earth. The planet's surface was at first molten and even as it cooled, it was getting pulverized by asteroids and comets. All that existed were simple chemicals. But about 3.8 billion years ago, the bombardment stopped, and life arose. Most scientists think the "last universal common ancestor" — the creature from which everything on the planet descends — appeared about 3.6 billion years ago.

But exactly how that creature arose has long puzzled scientists. For instance, how did the chemistry of simple carbon-based molecules lead to the information storage of ribonucleic acid, or RNA? The RNA molecule must store information to code for proteins. (Proteins in biology do more than build muscle — they also regulate a host of processes in the body.)

The new research — which involves two studies, one led by Charles Carter and one led by Richard Wolfenden, both of the University of North Carolina — suggests a way for RNA to control the production of proteins by working with simple amino acids that does not require the more complex enzymes that exist today. [7 Theories on the Origin of Life on Earth]

This link would bridge this gap in knowledge between the primordial chemical soup and the complex molecules needed to build life. Current theories say life on Earth started in an "RNA world," in which the RNA molecule guided the formation of life, only later taking a backseat to DNA, which could more efficiently achieve the same end result. Like DNA, RNA is a helix-shaped molecule that can store or pass on information. (DNA is a double-stranded helix, whereas RNA is single-stranded.) Many scientists think the first RNA molecules existed in a primordial chemical soup — probably pools of water on the surface of Earth billions of years ago. [Photo Timeline: How the Earth Formed]

The idea was that the very first RNA molecules formed from collections of three chemicals: a sugar (called a ribose); a phosphate group, which is a phosphorus atom connected to oxygen atoms; and a base, which is a ring-shaped molecule of carbon, nitrogen, oxygen and hydrogen atoms. RNA also needed nucleotides, made of phosphates and sugars.

The question: How did the nucleotides come together within the soupy chemicals to make RNA? John Sutherland, a chemist at the University of Cambridge in England, published a study in May in the journal Nature Chemistry that showed that a cyanide-based chemistry could make two of the four nucleotides in RNA and many amino acids.

That still left questions, though. There wasn't a good mechanism for putting nucleotides together to make RNA. Nor did there seem to be a natural way for amino acids to string together and form proteins. Today, adenosine triphosphate (ATP) does the job of linking amino acids into proteins, activated by an enzyme called aminoacyl tRNA synthetase. But there's no reason to assume there were any such chemicals around billions of years ago.

Also, proteins have to be shaped a certain way in order to function properly. That means RNA has to be able to guide their formation — it has to "code" for them, like a computer running a program to do a task.

Carter noted that it wasn't until the past decade or two that scientists were able to duplicate the chemistry that makes RNA build proteins in the lab. "Basically, the only way to get RNA was to evolve humans first," he said. "It doesn't do it on its own."

In one of the new studies, Carter looked at the way a molecule called "transfer RNA," or tRNA, reacts with different amino acids.

They found that one end of the tRNA could help sort amino acids according to their shape and size, while the other end could link up with amino acids of a certain polarity. In that way, this tRNA molecule could dictate how amino acids come together to make proteins, as well as determine the final protein shape. That's similar to what the ATP enzyme does today, activating the process that strings together amino acids to form proteins.

Carter told Live Science that the ability to discriminate according to size and shape makes a kind of "code" for proteins called peptides, which help to preserve the helix shape of RNA.

"It's an intermediate step in the development of genetic coding," he said.

In the other study, Wolfenden and colleagues tested the way proteins fold in response to temperature, since life somehow arose from a proverbial boiling pot of chemicals on early Earth. They looked at life's building blocks, amino acids, and how they distribute in water and oil — a quality called hydrophobicity. They found that the amino acids' relationships were consistent even at high temperatures — the shape, size and polarity of the amino acids are what mattered when they strung together to form proteins, which have particular structures.

"What we're asking here is, 'Would the rules of folding have been different?'" Wolfenden said. At higher temperatures, some chemical relationships change because there is more thermal energy. But that wasn't the case here.

By showing that it's possible for tRNA to discriminate between molecules, and that the links can work without "help," Carter thinks he's found a way for the information storage of chemical structures like tRNA to have arisen — a crucial piece of passing on genetic traits. Combined with the work on amino acids and temperature, it offers insight into how early life might have evolved.

This work still doesn't answer the ultimate question of how life began, but it does show a mechanism for the appearance of the genetic codes that pass on inherited traits, which got evolution rolling.

The two studies are published in the June 1 issue of the journal Proceedings of the National Academy of Sciences.