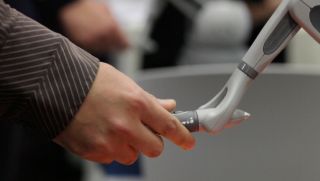 The Internet has been transformational, from how we communicate with friends and family to how we shop, and more recently, how we heal. Physical therapy is the latest treatment to become telemedicine, with an experimental system now connecting specialists to patients to provide help they otherwise couldn't get, aiding recovery from serious ailments, from broken limbs to stroke.

In an effort to connect physical therapy with wounded veterans far from treatment facilities, researchers from the University of Texas (UT) at Dallas have developed a rehabilitation system that uses real-time video, 3D computer-generated worlds and force-feedback "haptic" devices to recreate a physical therapy session between a patient and a therapist, all at long distance over high-speed networks. [Man's Best Friend Helps Traumatized Veterans Heal]

The team demonstrated the system at the Beyond Today's Internet Summit in March 2015. Organized by US Ignite and the Global Environment for Networking Innovations (GENI), two groups dedicated to advancing the frontiers of the Internet, the event showed what new capabilities are possible with ultra-high-speed, "smart," programmable networks.

The majority of U.S. citizens still have Internet connection speeds in the tens of megabits per second. However, through the NSF-supported GENI and US Ignite programs, researchers, experts and some communities are able to access gigabit networks with speeds 40 to 100 times faster than standard networks.

For 3D tele-rehabilitation to be lifelike and effective requires the system to have virtually no lag-time — or latency, in networking lingo — between action and reaction.

"To transfer all of this data requires a bandwidth greater than 100 megabits per second, which we currently can't do over the Internet," said Karthik Venkataraman, a Ph.D student working on the computer-enabled health technologies in computer scientist Balakrishnan Prabhakaran's Multimedia Systems Lab at UT Dallas. "GENI and US Ignite provide the bandwidth and low latency that is required by these kinds of applications."

Reach out and touch someone

Every year, physical therapists help millions of people recover from the debilitating impacts of strokes, injuries and a range of other ailments — but not everyone has access to a treatment facility or a physical therapy professional.

"We're trying to virtualize a physical therapy session in which a patient and a therapist cannot be present at the same location," explained Venkataraman.

To bring the tele-rehabilitation to life, the system uses Microsoft Kinect to create 3D, real-time models of the patient and the doctor. The models then join a shared virtual environment, a computer-generated space customized by the participants.

To simulate the touch aspect of the physical therapy session, the patient responds to a touch-sensitive "haptic" arm controlled by the therapist via a paired haptic device. [How Military Services Impacts Returning Veterans]

At the summit, the team demonstrated a physical therapy session in which two individuals practice sawing a log, a task that mimics the movements used by recovering stroke patients. The participants feel both the resistance of the log and the guiding movements of their partner, just as would occur at an in-person therapy session.

The researchers say this is just one example of what can be achieved with next-generation networks that support high-bandwidth and low-latency communication. The team is also working on extending the tele-rehabilitation system so one therapist or physician can work with multiple patients at the same time.

"This scaled-up version will ensure privacy in the sense that the patients will not be able to see other patients. Only the therapist will be able to view and monitor multiple patients," said Prabhakaran Balakrishnan, the lead researcher on the project. "The therapist will also be able to pick one patient and work with him or her on a one-to-one basis." [By the Numbers: 5 Cultural Facts About Veterans]

In collaboration with Thiru Annaswamy, a physician and assistant professor of medicine at UT, the 3D tele-rehabilitation system will be deployed at the Dallas Veterans Affairs Medical Center and used to help rehabilitate disabled veterans, with field trials beginning in June.

"If the patient and the therapist cannot be in the same location," Venkataraman said, "we still want to be able to give that virtual experience of him or her being together with the therapist in the same room."