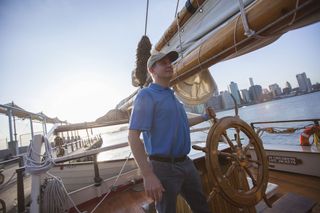 NEW YORK — Sailing and science enthusiasts took to the schooner Mystic Whaler over the weekend to learn what tall ship sailing, life in space and studying Antarctica have in common.

Passengers had the chance to hoist the sails and cruise around the waters of New York Harbor, while listening to retired NASA astronaut Nicole Stott and Columbia University geophysicist Frank Nitsche recount stories of their own expeditions.

Built in 1967 (and later rebuilt in 1993), the ship is a reproduction of a late 19th century coastal cargo schooner designed for passengers. On Saturday (May 30), New Yorkers of all ages had the chance to set sail on the tall ship as part of the World Science Festival, a multiday event that celebrates science. [Image Gallery: Shipwreck Alley's Sunken Treasures]

The ship set off from Brooklyn Bridge Park at sunset, under engine power. But passengers soon had the chance to help raise the sail — a 3,000-square-foot (280 square meters), four-cornered arrangement known as a gaff rig.

As the ship cruised around the harbor and took in stunning views of the Manhattan skyline and the Statue of Liberty, Stott and Nitsche regaled the guests with stories of their respective missions to space and Antarctica.

Stott, who recently retired from NASA, flew two missions to the International Space Station aboard the space shuttle Discovery, in 2009 and 2011. In some ways, a mission to space is not unlike an expedition at sea, she said. In fact, to train for her missions, Stott lived in an underwater habitat off the coast of Florida. "It was the closest thing to preparing you for space," she said.

Stott fielded questions on everything from the quality of space food to hygiene in zero gravity. The food is "not bad," but leaves something to be desired in the nutrition department, she said. As for showering, you simply squirt out a blob of water and stick your arm through, she said. The hardest thing to get used to in space? Moving gracefully, Stott said.

Nitsche, of Columbia's Lamont-Doherty Earth Observatory, leads expeditions to map the seafloor, from the Hudson River to the ocean around Antarctica. "We have better maps of the moon and Mars than we have of the seafloor," he said.

In his work to map the Hudson, Nitsche has come across hundreds of shipwrecks, the locations of which have mostly been kept secret to prevent people from plundering them, he said.

Nitsche has traveled to Antarctica several times, where he mapped the seafloor and reconstructed the location of ice in the past, in order to understand how today's glaciers are melting.

As night descended, a bright moon rose above the ship's sails, and the Mystic Whaler's crew led passengers in a moment of silence. As the ship headed homeward, city lights flickered on and the first stars began to twinkle in the night sky.