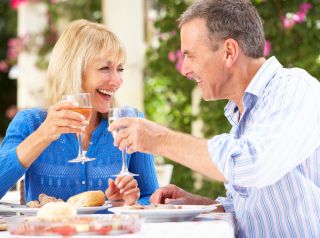 Having a few alcoholic drinks every day may be harmful for the hearts of older people, according to a new study.

In the study, researchers looked at the relationship between alcohol consumption and the heart in about 4,500 people whose average age was 76. They found that the more alcohol the people in the study consumed, the more pronounced the changes in the heart's structure and its ability to function.

For example, in men, having more than 14 drinks a week was tied to an increased risk of having an enlargement of the wall of the heart's main pumping chamber, the left ventricle.

The study shows that "the more alcohol you drink on a regular basis, the more likely you are to potentially damage your heart muscle," said Dr. David Frid, a cardiologist at Cleveland Clinic in Ohio, who was not involved in the study.

The investigators also found that in women, drinking even moderate amounts of alcohol — defined as one drink per day — was linked to small decreases in the heart's ability to function. [7 Ways Alcohol Affects Your Health]

"In spite of potential benefits of low alcohol intake, our findings highlight the possible hazards to cardiac structure and function by increased amounts of alcohol consumption in the elderly, particularly among women," lead study author Dr. Alexandra Gonçalves, a cardiologist and postdoctoral research fellow at Brigham and Women's Hospital in Boston, said in a statement. The study was published today (May 26) in the journal Circulation: Cardiovascular Imaging.

Researchers have known for a long time that drinking alcohol has some good and some bad effects on the heart, depending on the amount of alcohol consumed, Frid said. "A little bit is good, but a lot more is not better; it is actually worse," he said.

In one study that showed the benefits of drinking moderately, researchers found that women who drank two to nine drinks weekly were less likely to be diagnosed with heart disease or to die from it over the next four years, compared with women who reported lifetime abstinence from alcohol, according to the findings published in 2002 in the journal Health Reports. In another study, published in 2003 in the journal the Annals of Internal Medicine, researchers found that people who drank moderately were less likely to have heart failure than those who drank less than one drink weekly.

Another way alcohol may affect the heart is by killing the heart's muscle cells, Frid said. The more alcohol that is present in a person's blood stream, the more the heart muscle gets exposed to the alcohol, and the greater the likelihood of early death of heart muscle cells, he said.

The new study "reinforces the U.S. recommendations stating that those who drink should do so with moderation," Gonçalves said.

The American Heart Association guidelines and 2010 U.S. Dietary Guidelines currently recommend that women limit their alcohol consumption to one drink per day, and men limit their intake to two drinks per day.