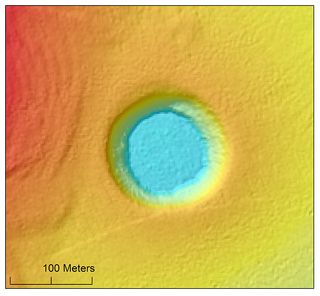 Four giant craters were found by accident in the muddy floor of one of Switzerland's largest lakes, a new study reports.

Researchers surveying Lake Neuchâtel for evidence of past earthquakes spotted the craters near the lake's northwestern shore near the Jura Mountains. The biggest crater is 525 feet (160 meters) wide and almost 100 feet (30 m) deep. The pits are among the largest and deepest pockmarks ever found in Earth's lakes, the researchers said. The giant craters are similar in size to seafloor pockmarks created by methane-gas explosions. However, the researchers think that erupting groundwater excavated these "crazy craters."

"These craters are, in fact, springs," lead study author Anna Reusch, a doctoral student at the ETH Zurich Geological Institute, said in a statement.

Reusch and her co-authors found the craters at water depths of 328 feet (100 m) or more. The team was using ship-based sonar to search for sediment that had been disturbed by earthquakes. [See Photos of the Clearest Lake on Earth]

The Swiss Alps occasionally shake from earthquakes of up to magnitude 6, studies have shown. Scientists are also investigating the risk of earthquake- and landslide-triggered tsunamis in Alpine lakes. In the past decade, researchers have discovered that tsunamis wiped out villages along the shores of both Lake Geneva and Lake Lucerne in the past 1,500 years.

But instead of ancient quake or tsunami deposits, Reusch and her colleagues stumbled upon an enormous feature they dubbed Chez-le-Bart crater ("Crazy crater"). "I never expected anything like this," Reusch said. "The craters were so interesting that we simply had to take a closer look at this phenomenon," she added.

No one knows for sure how the craters formed, but the pits appear to occasionally spill over, perhaps violently, the researchers reported. The mud eruptions left behind distinctive layers of sediment that look similar to volcanic lava flows. The spillovers happened at least four times in the past 12,000 years, according to the study. The last mud eruption at Crazy crater happened 1,600 years ago, Reusch said.

Today, Crazy crater is filled with churning slurry of wet mud. The mix of water and sediment hides a deep crack that penetrates nearly 200 feet (60 m) down toward the underlying bedrock, the study researchers reported. Water welling up into the crack keeps the mud in motion.

The research team conducted detailed surveys of water and sediments in and around the craters. The results suggest these unusual features are connected to the Jura Mountains karst system, an underground network of limestone caves and cracks. The same limestone underlies the lake, and the scientists think that groundwater is bubbling up into the craters through cracks in the limestone rock. At least one crater directly overlies a major earthquake fault.

For instance, water inside Crazy crater is 47 degrees Fahrenheit (8.4 degrees Celsius), but the surrounding lake water is colder, at just 42 F (5.8 C). Chemical markers in the local karst groundwater are also a match for water drawn from the craters, Reusch and her co-authors reported April 21 in the journal Geophysical Research Letters.