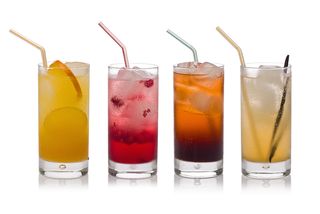 The type of sugar in your drink may affect how much food you want to eat, according to a new study. Researchers found that people wanted to eat more high-calorie foods when they had a drink containing fructose, compared with when their drink contained glucose.

In the study, 24 people were given drinks sweetened with 75 grams of fructose on one day, and the same amount of glucose in a drink on another day. The researchers also showed the people images of high-calorie foods that included candy, cookies, pizza and burgers, and asked the participants to rate how hungry they were and how much they wanted to eat each food.

After consuming fructose, the participants reported feeling hungrier and expressed a greater desire to eat the foods pictured than when they consumed glucose.

The different effects that glucose and fructose seem to have on hunger and people's desire for high-calorie foods may stem from the different ways each sugar interacts with the hormones that control feelings of satiety, the researchers said.

Unlike glucose, "fructose fails to stimulate hormones like insulin, which provides satiety signals to the brain," said study author Dr. Kathleen A. Page, an assistant professor of clinical medicine at the University of Southern California. So after the consumption of fructose, the brain may not be receiving the signals that trigger feelings of fullness, she said. [8 Tips for Fighting Sugar Cravings]

In line with previous research, the investigators also found that the levels of insulin in the participants' blood were significantly lower after they consumed fructose than glucose, according to the study. These differences in insulin levels may help explain the participants' different responses to food cues after consuming the two types of sugar, the researchers said. In previous research, rodents given insulin showed a decreased intake of palatable foods, and research in people has shown that giving insulin increases satiety and suppresses food intake, according to the study.

The researchers also examined the people's brains using fMRI, and found that, in response to images of high-calorie foods, the participants showed greater activity in the regions of the brain related to reward processing after consuming fructose, compared with after they consumed glucose.

Fructose and glucose have the same number of calories, and both are present in table sugar. But they are metabolized differently, the researchers said. Glucose is used to produce energy for the body, including the brain, and is the main sugar that circulates in the blood, Page said. Conversely, fructose is metabolized by the liver and very little of it actually circulates in the blood, she said.

In the study, the researchers also asked the participants to make a choice between two "rewards" for their participation — they could choose to have a tasty item of food immediately, or receive some money in a few weeks. The participants were more likely to pick the food after drinking the fructose.

"People were willing to forgo monetary rewards that were delayed by a month, more after they consumed fructose compared to glucose, so that they could get immediate food rewards after the study," Page said.

The new study was published Friday (May 1) in the journal Proceedings of the National Academy of Sciences.