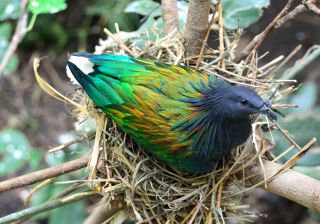 Iridescent creatures — such as dragonflies, catfish and boa constrictors — often dazzle onlookers with their shimmering colors. These alluring, luminescent hues may be key to an animal's survival, helping it to confuse and escape from predators looking for a meal, a new study finds.

Iridescence is hardly the only conspicuous coloration that befuddles predators, said the study's author, Thomas Pike, a behavioral and sensory ecologist at the University of Lincoln in the United Kingdom.

For instance, contrasting stripes may help animals escape from predators, likely because stripes make it hard for predators to judge speed and movement, Pike said.

"It struck me that the conspicuous colors displayed by iridescent animals may also allow them to evade predators using a similar mechanism," he said in a statement. [See Dazzling Photos of Iridescent Animals]

To investigate, he trained seven female Japanese quails to peck at a virtual black bug, represented by a 0.8-inch-diameter (20 millimeters) circle moving across a touch screen. When the quails pecked within 0.4 inches (10 mm) of the circle's center, Pike rewarded them with dried mealworms.

The quails also had less-accurate aim. They pecked about 0.6 inches (16 mm) away from the middle of the iridescent circles — an average of about 0.08 inches (2 mm) farther away than they did for the black circles.

The results suggest that changes in color or brightness, also known as "interference coloration," may make it difficult for predators to track prey, Pike said. Many animals have iridescence, including some insects, like beetles and butterflies; birds; fish; reptiles; cephalopods, such as squid; and at least one mammal, the golden mole, he said.

The study was published April 15 in the journal Biology Letters.