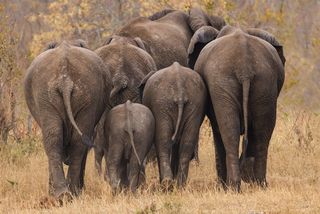 Karen Lange is senior content creator at the Humane Society of the United States (HSUS). She contributed this article to Live Science's Expert Voices: Op-Ed & Insights.

For 15 years, researcher Audrey Delsink has observed the elephants in South Africa’s Greater Private Makalali Game Reserve. As she's watched them, recording the effects of a contraceptive vaccine called PZP, she's seen something that's beyond the scope of her research: evidence of awareness.

She's observed it in the way individual members of breeding herds communicate — in low-frequency sounds human ears cannot pick up — and the way they cooperate.

"You'll see elephants walking and then suddenly stop, and that's because a member of the herd has issued a silent warning, or a silent rumble that says, 'Hang on and let's just hear what's going on and assess the situation,'" Delsink says." And then when it's all over, they walk off in unison. The communication is incredible. They clearly are sentient beings ."

Yet not so long ago, the creatures in whom Delsink senses understanding were killed by the hundreds to keep their numbers below a certain threshold. Unlike elsewhere on the continent, elephants in South Africa have long been confined to fenced parks and reserves with man-made water sources. Under favorable conditions, their populations can double within 15 years. Denser concentrations of elephants, who feed by uprooting trees or tearing off branches, can transform landscapes, especially around waterholes.

Before contraception and other nonlethal means of slowing population growth were developed, culling was thought necessary to protect the plants and habitats elephants and other species depend on.

From the 1960s into the 1990s, sharpshooters in Kruger National Park — which holds South Africa's largest elephant population — flew in helicopters over herds and fired bullets into the animals' brains. The shooters wiped out entire families — mothers, aunts, brothers, sisters — because survivors would have been traumatized, and could have become dangerous. A program to spare calves and relocate them was abandoned after male orphans entering adolescence gored rhinos to death in other protected areas because there were no adult bulls to teach the young elephants how to behave.

Delsink has been doing immuno-contraception research at Greater Makalali so that those killings, suspended in 1994 and allowed now only as a last resort, need never happen again. (Read more about this issue in "End of Culling?" in All Animals magazine.) She and a team of scientists supported by Humane Society International (HSI) have treated elephant cows at Greater Makalali since 2000 with PZP, delivering the vaccine by dart to elephant cows, twice in the first year and then once each year after. The drug — also used on deer, wild horses and other mammal species for population control — causes females to produce antibodies that bind to the surfaces of their eggs, blocking sperm from fertilizing them.

At Greater Makalali, a fenced reserve of just 90 square miles, PZP has cut the rate of increase of the elephant population in half. The number of animals has grown from around 50 in 2,000 to 83 today. Without contraception, it was projected that the population would have increased to 159 animals today, and by 2025 would have soared to 238.

While elsewhere in Africa, poaching has caused elephant populations to drop, threatening the survival of the species, in South Africa, poaching of elephants remains rare and their numbers are rising within the limited spaces left for them. Kruger once relocated elephants to other protected areas, but now all those have as many as they want and the smaller reserves that accepted elephants are wondering how to limit their numbers.

The success of PZP at Greater Makalali in regulating elephant population growth has led other fenced protected areas in South Africa to adopt it. The contraceptive vaccine is now being used in 20 parks and reserves, including nine of the 25 with the largest populations of elephants. Within the last two years alone, it has been adopted by three provincial parks and one national park.

Delsink is hoping that South African researchers can soon take a new longer-lasting form of PZP developed in the United States for wild horses and create a similar form for elephants, reducing the number of times the vaccine must be administered and persuading even more protected areas to adopt it. [Elephant Images: The Biggest Beasts on Land ]

PZP has not yet been adopted by Kruger, South Africa's largest park, where wildlife managers are using other experimental means to slow the growth of elephant numbers and change the way the animals use the landscape. Wildlife managers in Kruger have removed fences, allowing elephants to migrate into a neighboring park in Mozambique to find food (though few have), and the number of man-made water holes has been reduced, which forces elephants to walk farther to eat and drink, mimicking more natural situations in which a greater number of calves die, especially during droughts. For now, this has been enough to stabilize population growth.

Without PZP, culls might take place again, at least in smaller parks that cannot remove fences to give elephants more room to move, so that their feeding doesn’t have such an impact on the landscape.

On the day she went into labor, one of the elephants Delsink has observed for so long showed up at her house. Though he's a favorite of hers, the big bull, named "Riffraff," had never visited before. Delsink was touched by the presence of this "gentle soul."

"He just came and stood there for a really long time at the gate looking at me with his trunk up," she says. "And we had an exchange."

With PZP, the necessity of putting bullets in the brains of creatures like Riffraff will vanish. And friendships like those between Delsink and the big bull elephant — glimpses from the eyes of one species into the heart of another — can continue to occur.