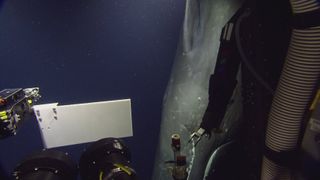 A lucky group of ocean lovers got the surprise of a lifetime when a huge sperm whale swam into their live video broadcast.

"What the heck is that?!," a crewmember exclaims. "OH WOW. We have a sperm whale."

The incredible whale footage was filmed yesterday (April 14) by the Nautilus Live expedition, which is exploring the Gulf of Mexico's seafloor methane seeps. The whale suddenly appeared while scientists were watching methane bubbles and sampling seawater with a remotely operated vehicle (ROV), called Hercules.

The researchers laughed with delight as the curious sperm whale gracefully maneuvered around Hercules, never once bumping the 11-foot-long (3.3 meters) ROV or rubbing its cables. The whale circled Hercules for several minutes. [Whale Album: Giants of the Deep]

"It was such an amazing moment," said Susan Poulton, an expedition spokeswoman who is onboard the E/V Nautilus ship with the scientists. "There was a lot of cheering on the ship."

The whale came close enough for viewers to spot scratches on its head and look the whale in the eye. The scientists and sailors were stunned. "Fantastic!" "Amazing!" "He's looking at us!" they shouted.

No one knows what drew the sperm whale's interest; it could have been Hercules' glowing lights in the dark sea, acoustic pulses from a sonar instrument monitoring the bubbles or simply a chance encounter. Sperm whales use their massive heads to send out pulses of sound that help the whales hunt and communicate. The crew turned off the sonar instrument, which sends out a fan-shaped acoustic signal, as soon as the whale approached, Poulton said.

However, there is plenty of evidence that big whales are curious creatures. Sperm whales have snooped on ROVs before; in another underwater video posted on YouTube, a massive sperm whale checks out a remotely operated robot. The whales are also notorious fish-nabbers, known for stealing from longline fishing lines in Alaska. Humpback whales, gray whales and blue whales also approach boats and kayakers regularly.

This was the first time anyone aboard the Nautilus had spotted a whale with the ROV, Poulton said. The ship has explored the Mediterranean and the Gulf of Mexico since 2010.

There are no whale biologists onboard the Nautilus, so the crew has contacted onshore researchers for help in determining if the sperm whale was male or female, Poulton said. The whale was about 35 feet (10 m) long, the team estimates.

The ROV Hercules was anchored nearly 2,000 feet (600 m) below the surface, and the E/V Nautilus was nearly 40 miles (63 kilometers) offshore Louisiana yesterday. For deep-diving sperm whales, which hunt squid in the crushing ocean abyss, the depth was relatively shallow.

The ship was also close to the source of the Deepwater Horizon spill, located about 9 miles (14 km) to the southeast. The methane sampling conducted with Hercules will help scientists understand how naturally occurring bacteria consume methane, and whether the microscopic organisms can mitigate the effects of the 2010 spill. Scientists also want to know how much methane, a greenhouse gas, enters the atmosphere from the ocean.

Nautilus Live will live stream the broadcast of the Gulf of Mexico expedition for the next six months. You can watch the online broadcast at NautilusLive.org. Want even more ocean science? The R/V Okeanos Explorer is broadcasting live though April 30 from the deep sea near Puerto Rico and the U.S. Virgin Islands.