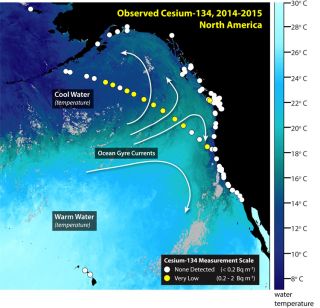 Very low levels of radioactive chemicals that leaked from Japan's 2011 Fukushima nuclear disaster have been detected along the North American coast for the first time, scientists said yesterday (April 6).

Trace amounts of cesium-134 and cesium-137 (radioactive isotopes) were found in seawater collected Feb. 19, 2015, at a dock in Ucluelet, a town on the west coast of Vancouver Island, British Columbia,  said Ken Buesseler, a marine chemist at Woods Hole Oceanographic Institution (WHOI). The radioactive isotope numbers refer to the different numbers of neutrons carried by different versions of the cesium isotope.

In the Ucluelet seawater, the amount of cesium-134 was 1.4 Becquerels per cubic meter of water (a unit of measure based on the number of radioactive decay events per second per 260 gallons of water). That's about 1,000 times lower than the drinking water limit set by the U.S. Environmental Protection Agency, Buesseler said. The water also contained 5.8 Bq/m3 of cesium-137. [Fukushima Radiation Leak: 5 Things You Should Know]

Buesseler is leading a crowdfunded citizen science program to track Fukushima pollution in the Pacific Ocean and along the U.S. and Canadian West Coast. Volunteers from the Ucluelet Aquarium collected the seawater, raised money for testing and shipped the samples to WHOI in Woods Hole, Massachusetts, for analysis.

Two factors make cesium-134 the perfect tracer for tracking pollution from the Fukushima Daiichi nuclear power plant meltdown. First, cesium-134 does not occur on its own in nature, only forming in nuclear reactors. Second, the isotope has a two-year half-life, which means any cesium-134 in the ocean today must have a recent source: Fukushima. (Every two years, half of the cesium-134 disappears because it transforms into barium.)

Buesseler said he expects radioactive cesium levels to eventually reach the rest of the West Coast, from Washington to California. No radiation has been detected at the 59 U.S. coastal sites regularly tested during the last 15 months, he said. However, in November 2014, similarly low levels of both isotopes were detected about 100 miles (161 km) offshore of Northern California.

"Predicting the spread of radiation becomes more complex the closer it gets to the coast," Buesseler said in a statement. "We need the public's help to continue this sampling network."

In addition to the shoreline-sampling program, which is primarily sponsored by private donations, WHOI scientists have received National Science Foundation funding to collect 250 seawater samples this May between Hawaii and Alaska, the researchers said. The Scripps Institution of Oceanography in La Jolla, California, also plans to grab 10 offshore samples during upcoming research cruises.