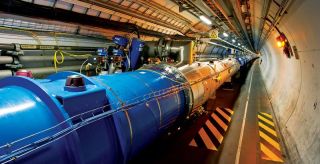 It’s a great day for particle physics fans: The world’s largest atom smasher has been cleared to start running again as early as this weekend.

After a two-year hiatus, researchers and engineers planned to restart the Large Hadron Collider (LHC) last week, but an electrical short delayed the process. Scientists quickly found the glitch: a small piece of metal lodged in the wiring of one of the LHC’s powerful electromagnets.

Manually removing the debris could have taken months. Instead, engineers were able to send a blast of high electric current through the circuit to burn away the wayward piece of metal. "It’s a bit like deliberately blowing a fuse," Paul Collier, head of beams at the European Organization for Nuclear Research (CERN), which manages the LHC, told Nature News. [See photos of the Large Hadron Collider]

Scientists followed up their troubleshooting with several tests, and announced this week that they had been successful. There is still some work that remains — mainly re-installing equipment that had been removed to deal with the glitch — but the process was far shorter than the manual alternative (which would have required warming the system to room temperature and then cooling it back down to just a little above absolute zero).

"We are confident of being able to restart the machine over the weekend, as all of the tests performed so far have been successful," Frederick Bordry, director for accelerators and technology at CERN, said in a statement.

The LHC is a 17-mile-long (27 kilometers), ring-shaped particle accelerator located underground near Geneva, Switzerland. Scientists at the facility made history in 2012, when it was announced that evidence of the Higgs boson — a subatomic particle that gives all other particles their mass — had been discovered. For that discovery, the LHC smashed protons together at energies of up to 8 trillion electron volts (TeV). When the LHC comes back online, that dial will be turned up to nearly twice as much, at 13 TeV.

With the restart, discoveries at the LHC could cross a threshold into a new regime of high-energy physics, physicists say. At such high energies, scientists will be able to probe new particles and potentially produce dark matter, the invisible stuff that makes up 84 percent of the Universe’s matter. But even more exciting will be those discoveries they don't expect to make — the ones that dramatically change our understanding of the universe.