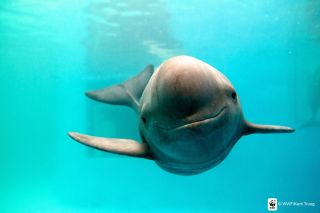 The year 2006 doesn't seem that long ago. That year brought the launch of Twitter, the demotion of Pluto, the World Series championship to the St. Louis Cardinals. Amid that breaking news, one headline of great consequence went largely unnoticed: In 2006, one of the world's most mystical animals quietly slipped away from our planet, forever.

The Yangtze River dolphin, once known in ancient Chinese legends as representing the reincarnation of a princess, went extinct as industrialization expanded and the Yangtze's resources were pillaged. The poor health of the Yangtze — caused by overfishing and extreme pollution, among other factors — damaged the river's ability to support life and meet the needs of the millions of people whose livelihoods depended on that resource.

Now, a mere decade later, the Yangtze's other cetacean, the Yangtze finless porpoise, is in peril due to similar causes: Unsustainable fishing practices and depleted fish stocks, sand dredging, mining and a continued increase in pollution, among other threats. Known for its mischievous "smile," only 1,000 of the porpoises remain. Without intervention and a shift in how China manages its freshwater resources, the Yangtze finless porpoise could vanish within the next five to 10 years. [The Costs of Fresh Water in a Changing World (Op-Ed )]

The porpoise is just one of the myriad freshwater species at risk. According to WWF's Living Planet Report, freshwater species globally are declining at a rate of 79 percent each year – much faster than any other group of species on the planet.

We must reverse these trends.

Halting the demise of the finless porpoise is not just about doing what's right and saving the voiceless from extinction, but about securing China's future. The Yangtze River, the longest river in Asia, provides livelihoods and sustenance for one-third of the people who live in its basin. More than 30 percent of China's GDP depends on the health of the river — for water, food, energy and economic growth. What threatens the porpoise also threatens the Yangtze's ability to continue providing those services.

Freshwater wetlands, rivers and lakes around the world provide countless benefits: They regulate the temperature of the Earth, create clouds and affect normal weather patterns, transport nutrients and minerals downstream, and keep nature and humanity clean. Wetlands are the kidneys of the world: they purify water. As further industrialization widens in Asia, wetlands are especially at risk. [Saving Yangtze Porpoises Can Save China (Gallery)]

Simply put: water is everything, an essential ingredient for life on Earth.

However bleak the outlook seems, I am inspired by China's recent conservation efforts. Last year, China's Ministry of Agriculture classified the finless porpoise as a National First Grade Key Protected Wild Animal, the strongest classification available by law in China, bringing stronger protection and protection enforcement for the species.

And, on March 27, a group from WWF-China — along with local Chinese fisherman, scientists from China's Institute of Hydrobiology, and support from China's Ministry of Agriculture — relocated eight Yangtze finless porpoises to a safer environment. Four went to the He-wang-miao/Ji-cheng-yuan oxbow, a nature reserve that will hopefully host up to 100 finless porpoises in the near future, and four to Tian-e-zhou oxbow to boost the genetic diversity of that reserve's small population. Known as "breed conservation," WWF and our partners are hoping to create viable new pods to save this species from extinction.

But more needs to be done, and we need to make better use of, and value, our natural resources. WWF is working with private sector and government partners to restore and protect the Yangtze. This includes working with farmers to minimize runoff, fishers to encourage sustainable fishing practices, industrial parks to reduce pollution, and policymakers to create conditions that help freshwater ecosystems now and long into the future. By working together, we can secure prosperity for people and the porpoise.

The Yangtze finless porpoise, thousands of other freshwater species, all of mankind, and ultimately every being on Earth cannot live without water. Now is the time to act to replenish clean freshwater in our rivers and lakes, save the finless porpoise and save ourselves.