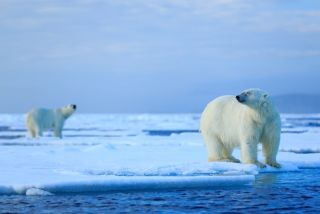 In an attempt to snag a mate, a male polar bear can track and follow a female for miles, even trying to herd her to isolated areas like islands or high cliffs.
(Image: © Ondrej Prosicky / Shutterstock.com)

As the largest land carnivores currently on the planet, polar bears are fearsome predators and the masters of their Artic domain. But do these hulking animals also have a softer side toward each other, or are their mating behaviors just as cold and unforgiving as their frozen habitat?

Polar bears (Ursus maritimus) are generally solitary creatures that only come together to mate during the breeding season, which typically runs from late March to early May.

"In spring, what the males do is just roam around and try to pick up females," said Jon Aars, a polar bear researcher with the Norwegian Polar Institute, adding that the animals have powerful noses and likely track potential mates by scent. "They have little problem locating females."

It's not unusual for a male to track and follow a female for many miles, and males may even try to herd a female to isolated areas on the top of islands, in small bays or up on high cliffs, in an attempt to monopolize mating and reduce competition from other mates.

However, observational studies suggest these attempts fail more often than not, given that females are frequently seen among groups of competitive males.

Polar bears are sexually dimorphic and males are, on average, are about twice the mass of females. They also have "guard hairs" on their forelegs that are noticeably longer than those on females.

These hairs are probably ornamental, but just what purpose they serve is unclear. Scientists hypothesize males' long guard hairs may help them appear larger, making them more attractive to females and seem tougher to rival males.

But males do more than just size each other up and wait for a female to choose her mate — they engage in fierce battles, which can result in broken canines, temporary wounds and permanent scars, and typically end when the dominant male chases all its rivals away.

Once the female goes into estrous (heat), she and her male champion will mate, with the male mounting the female from behind. Studies of captive polar bears suggest pairs copulate for around half an hour, but copulation times may differ in the wild. In a 2015 study in the journal Polar Research, Aars and his colleague Thomas Smith reported observations of a pair mating for 65 minutes.

Mating induces ovulation in the female, and a male will guard and repeatedly mate with a female for up to 10 days to better his chances of fathering cubs. "He will stick around for however long he thinks it's worth it to guard the female," Aars said.

After a pair separates, they may go on to mate with other polar bears. Male and female polar bears may have multiple mates in a single breeding season and, as Aars and his colleagues reported in a 2009 study in the Canadian Journal of Zoology, this can sometimes result in litters with multiple paternities.

Female polar bears undergo delayed implantation; that is, their fertilized eggs don't implant until the fall, when the mothers-to-be have gained considerable weight. About two months later, by early January, they give birth. They won't mate again for another 2.5 to three years, after the cubs have been weaned.

But if a female's cubs die prematurely — whether by environmental factors or at the claws and teeth of adult males — she may go into estrous early, and even mate during the summer if she's already missed the spring breeding season, Aars said.