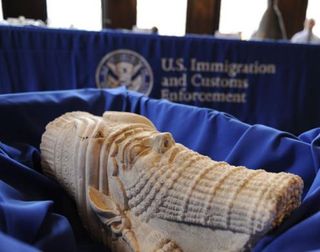 This head of Sargon II has been returned to Iraq.
(Image: © U.S. Immigration and Customs Enforcement )

U.S. authorities turned over more than 60 stolen artifacts to Iraq Monday (March 16), including gold-plated items from Saddam Hussein's palace and a limestone head of the Assyrian king Sargon II from an ancient city that was recently wrecked by ISIS militants.

Back in June 2008, special agents with the Department of Homeland Security's Immigration and Customs Enforcement (ICE) in New York were working on "Operation Lost Treasure," an effort to break up antiquities-trafficking networks. They got a tip from their international partners to look out for an Iraqi artifact entering the United States. Two months later, special agents seized the limestone head of Sargon II after it was shipped from Dubai to New York.

Experts believe the head was hacked off one of the lamassu (or winged bulls) at Sargon II's palace in the 2,700-year-old Assyrian capital at Khorsabad in northern Iraq, ICE special agent Brenton M. Easter told Live Science. [In Photos: See the Treasures of Mesopotamia]

The repatriation ceremony, which took place in Washington, D.C., comes amid brutal attacks on Iraqi cultural heritage. The extremist group that calls itself the Islamic State, or ISIS, has bulldozed ancient cities like Nimrud and ransacked the Mosul Museum, according to Iraq's Ministry of Culture. Just last week, ISIS militants reportedly razed and looted Khorsabad. Further south, near Tikrit, the lavish tomb of the late dictator Saddam Hussein was leveled amid heavy fighting, according to the Associated Press.

"While we stand here united with our friends and allies, we send a strong message to Daesh (the Arabic term for ISIS) and its destruction that we are committed to defeating the terror, rebuilding our country and preserving its cultural heritage," Lukman Faily, U.S. ambassador to the Republic of Iraq, said in a statement. "The return of our looted archaeological items is a national project, and we call upon all countries to help us in preserving this heritage, which is not only valuable for Iraq but for all mankind."

U.S. officials also returned 37 Iraqi bronze objects, 21 clay reliefs and 18 pieces of Iraqi glass artifacts, which were recovered as part of another effort, called "Operation Mummy's Curse." They returned a bronze ax from ancient Sumeria that was being sold on Craigslist in Austin in 2012, and several gold-plated items — including a water urn, door knocker and soap dish — from Saddam Hussein's palace that had been recovered by special agents in Connecticut.

"These ancient treasures we are returning do not belong in the hands of any private collection or any one owner," Sarah R. Saldaña, director of ICE, said in a statement. "They belong to the people of Iraq, where they will be displayed and protected. ICE will not allow the illicit greed of some to trump the cultural history of an entire nation."