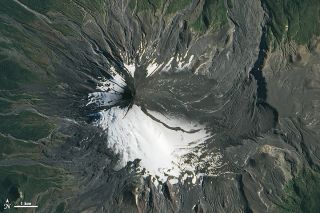 Ash blankets the east side of the Chilean volcano in an image taken by NASA's Operational Land Imager (OLI), which is on Landsat 8. The image was taken March 5, two days after the eruption.
(Image: © Jesse Allen | NASA Earth Observatory)

New images of the recent eruption of one of Chile's most active volcanoes reveal how powerful blasts of lava and ash blanketed the mountain's side with volcanic material.

The Villarrica volcano erupted in the early morning hours of March 3, 2015, forcing thousands of people to evacuate the region, according to reports from Chile's National Geology and Mining Service.

In the first image, snow surrounds the volcano, but in the second, a large amount of volcanic material, called tephra, coats the volcano's eastern side. [See more images of Villarrica's March eruption]

More than 2,000 people living within the 6-mile-radius (10 kilometers) of Villarrica evacuated as the volcano spewed ash and lava into the sky, according to the Center for Satellite Based Crisis Information. There were concerns that heat from the eruption might melt snow on the volcano and cause mudslides, but no injuries were reported, the center said.

Still, the volcanic ash could pose a health hazard. Meteorologists predict that winds could still blow the ash cloud south and across remote parts of Argentina, the center reported.

Geologists have followed Villarrica's rumblings for more than a month. Researchers recorded increased seismic activity, crater incandescence and explosions throughout February, according to Chile's National Geology and Mining Service. Just before Villarrica's eruption, Jeffrey Johnson, a geophysicist for Boise State University in Idaho living in Chile, planned to evacuate the city of Pucón with his family. But within 30 minutes, the eruption slowed, and Johnson decided to stay. As the blasts subsided, he resumed his work examining low-frequency sounds recorded by dozens of microphones placed around the mountain, according to a statement from NASA's Earth Observatory.

Johnson and his students at Boise State are still analyzing the sounds, and they will continue to monitor the volcano, they said.