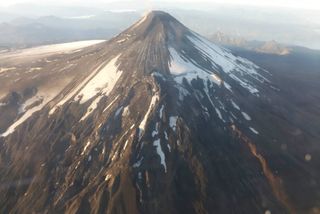 An early morning eruption at Chile's Villarrica volcano lit the dark sky with a spectacular display of glowing ash and sputtering lava on Tuesday (March 3).

The small, short-lived eruption spewed ash nearly 10,000 feet (3 kilometers) high and launched a fiery lava fountain into the air starting about 3 a.m. local time (0600 GMT). The heat melted snow and ice at the Andean peak, washing ash into Lake Villarica at the foot of the volcano.

An aerial inspection of the mountain on Tuesday revealed a fresh coating of lava "spatter" and ash but no lava flows at Villarrica's summit, according to Sernageomin, Chile's geological survey.

Villarrica typically erupts with paroxysms of fire fountaining, similar to those at Italy's Mount Etna, followed by lava flows. If the volcanic activity follows similar patterns as in the past, the eruption could last for days to weeks. [The World's Five Most Active Volcanoes]

The Andean peak is one of South America's most active volcanoes. Each year, its snowy peak attracts hundreds of hikers, who battle fierce winds and toxic volcanic gases for a view of the lava lake at Villarrica's summit.

Villarrica's cone-shaped peak looms over the popular resort town of Pucón, about 460 miles (750 km) south of Santiago. About 3,500 people have been evacuated so far from towns within 6 miles (10 km) of the volcano, including from Pucón, Villarrica and Curarrehue, according to Sernageomin.

Villarrica's most recent eruptions were in 1984 and 2000. Eruptions in 1963 and 1971 triggered deadly lahars when lava melted snow and ice at the summit. Scientists have mapped nine channels where lahars are likely to flow down the mountain, according to a 2010 study.

The eruption was heralded by more frequent earthquakes and explosions at the volcano. Activity started to pick up at Villarrica in February, prompting Sernageomin to issue a yellow alert warning. Ash explosions, gas emissions and earthquakes grew more common during the past month.