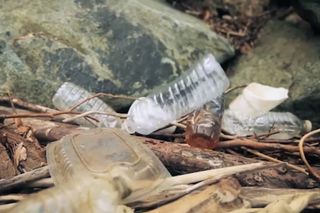 According to the U.S. Environmental Protection Agency, in 2012, the U.S. generated almost 32 million tons of plastic waste, but only 9 percent of that was recovered for recycling, leaving about 29 million tons. Some of that ends up in landfills, and some of it ends up as ground litter or in the ocean.
(Image: © NSF)

Jacqueline Conciatore is a science writer for the U.S. National Science Foundation. She contributed this article to Live Science's Expert Voices: Op-Ed & Insights.

It's no longer common to hear, "Paper or plastic?" at the supermarket. In many jurisdictions, the plastic option is curbed. Hundreds of local governments around the world — even entire countries, such as China and India — ban or tax lightweight, single-use plastic bags.

Every year in the United States, more governments enact such restrictions, which are part of a larger shift away from petroleum-based plastic. As people grow more concerned about throwaways destined for landfills (or worse, for the open ocean) and the problems associated with fossil fuels, businesses of all sizes are looking beyond "traditional," petroleum-based plastics to alternatives derived from plants, or even synthesized by microorganisms.

Bioplastics are made wholly or in part from renewable biomass sources such as sugarcane and corn, or from the digest of microbes such as yeast. Some bioplastics are biodegradable or even compostable, under the right conditions. [Citizen Science Aims to Clean Up Pacific Plastics]

These new, more eco-friendly plastics are cropping up in all sorts of places, from tea bags to 3D printing media to medical implants.

In Finland, for example, consumers can now buy milk in cartons, made by Tetra Pak, that are 100 percent plant-based. In the United States, a small company called Iris Industries used Kickstarter to get off the ground with "Denimite," a marbleized blue composite made of recycled denim and a thermoset resin binding agent that is partially bio-based. And NSF-funded Ecovative makes a packing material called Myco Foam that's designed to replace polystyrene packaging, that bane of environmentally aware consumers who nevertheless buy take-out meals.

Bio-based plastics are on the rise. The thriving European market for bioplastics is growing by more than 20 percent per year. Global demand is expected to rise by 19 percent annually through 2017, according to market research group Freedonia. Global production capacities are set to increase by 400 percent by 2018, with most bioplastics being produced in Asia, according to European Bioplastics (EUBP), an association that represents the interests of the industry in Europe.

Packaging has been, and still is, one of the most common uses for bioplastics, but there is growth in other areas, such as textiles and automotive applications.

Even the sports-car market appreciates bioplastics. Mazda announced late last year that it would use a new bioplastic in the interior (and, eventually, exterior) of its MX5 Miata. In a December 2014 press release, the company says the plant-based plastic it developed with Mitsubishi Chemical Corp. can be dyed and has a higher-quality, less-toxic finish than traditional painted surfaces.

Likewise, the Ford Motor Co. said last July that it will work with Heinz to make plastic out of leftover tomato skins, for use in car wiring brackets and storage bins.

How plastics are born

All of this activity is exciting, but most of today's plastic still comes from a nonrenewable resource: crude oil deposits in the earth. The oil is extracted and sent to a refinery to be distilled and yield an intermediate product called naphtha. Intense heat helps "crack" the naphtha into smaller hydrocarbon molecules such as ethylene and propylene. These chemicals are combined with a catalyst and polymerized to form chains of many linked molecules — the materials we know as plastics.

The push to use alternative, more renewable feed stocks rests on increasing concerns about the impact of petrochemicals on health and the environment, as well as the wariness people feel about relying on finite fossil-fuel resources. Many petroleum-based plastics don't break down for hundreds, or even thousands, of years — the carbon-carbon bonds that form the polymers are that durable. According to the U.S. Environmental Protection Agency (EPA), in 2012, the U.S. generated almost 32 million tons of plastic waste, but only 9 percent of that was recovered for recycling, leaving about 29 million tons. Much of the rest ends up in landfills, as ground litter or in the ocean.

In addition, petro-based plastics have been linked to health concerns such as endocrine disruption, and studies show some potentially harmful plastic chemicals accumulate in the human body.

Planting the next plastic crop

To spur solutions, some governments are promoting global and national bio-based economies or so-called bioeconomies. In 2012, the Obama administration released a National Bioeconomy Blueprint that calls for increased research and development, technology transfer, training and other steps to drive the nation's bioeconomy. Businesses are interested in following that lead — in fact, they may actually be ahead of consumers, some of whom aren't willing to pay a premium for greener plastics. [Forging Biodegradable Plastic From Methane and Plant Waste]

"The consumers want these materials, and they want to be more sustainable," said Marc Hillmyer, director of the University of Minnesota's Center for Sustainable Polymers(CSP). "But they're generally not going to do it at a cost. What we hear from industry is, 'Yes, we obviously have businesses that rely on petrochemical feed stocks, and we obviously want to be profitable in those businesses. But we want to be part of the future as well," Hillmyer added.

Coca-Cola has been one of the big-business leaders in bioplastics development, with a recyclable "PlantBottle" that is made partially from PET (polyethylene terephthalate) derived from sugarcane. PlantBottle packaging accounts for 30 percent of the company's packaging in North America and 7 percent globally, "making Coke the world's largest bioplastics end user," the company has said. The company has also said it wants its bottles to be 100 percent made of plant-based plastic by 2020.

Alternative plastics also show up in niche products. For example, last year, wine cork maker Nomacorc released a recyclable cork made of renewable plant-based polyethylene, and a Finnish company called Ahlstrom sells tea bags made of polylactic acid (PLA), which is derived from resources such as corn starch and sugarcane, and is one of the most commonly used bioplastics.

The cost of green

Researchers working with businesses are challenged to make a material that will not only be biodegradable and nontoxic, but also cost-effective.

"Many people, including us, are very good at making expensive polymers that help us advance basic science but that are not economically all that viable," Hillmyer said. "And so, what we're really trying to emphasize in the center, again with industrial input, is how do we do it economically?"

To date, Hillmyer and his colleagues have had several success stories:

There are many other challenges in developing new materials and getting them from the lab to the market.

"Our undergraduates, graduate students and postdocs all regularly hear from industry about the challenges that [companies] face when trying to introduce a new material into the marketplace," said CSP Managing Director Laura Seifert. "Can it be scaled up to an industrial process in an economically viable way? Can the material be used in existing infrastructure, or do we have to build an entirely new plant in order to adopt this new technology? And at the end of life … is it going to cause more harm than good to introduce this into our recycling stream?"

"These are hard problems," said Hillmyer. "If it was easy, somebody would have done it."

While the polymer industry is not going to shift overnight, in the long run change is inevitable, he added. "The graduate students and postdoctoral researchers and undergraduates . . . in the center, they're driven by these principles. So we are not having a hard time convincing them that this is something they should do. They're growing up in this world [asking] 'How do we make our world more sustainable?'"