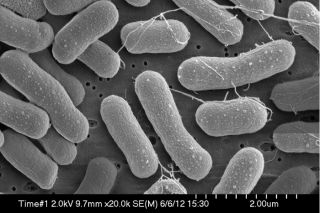 Molly Morse is chief executive officer of Mango Materials, Inc. This article was prepared by the U.S. National Science Foundation for the American Institute of Chemical Engineers and appeared in the February 2014 issue of Chemical Engineering Progress. Morse contributed this article to Live Science's Expert Voices: Op-Ed & Insights.

What if we could make the Great Pacific Garbage Patch just disappear? What if plastics didn't accumulate in landfills? What if we could reduce greenhouse gas emissions while replacing up to 30 percent of the world's plastics with a biodegradable substitute?

Researchers have tried for decades to achieve those goals. One approach was to develop an efficient production process for poly-hydroxyalkanoate (PHA) — a biodegradable polymer similar to the polypropylene used to make plastic packaging.

Scientists at Stanford University and a Palo Alto, Calif.-based start-up company called Mango Materials have come up with a new way to make PHA from waste methane gas. And, with funding from the U.S. National Science Foundation, Mango Materials is advancing the process toward commercialization.

PHA is a biodegradable polyester that is produced naturally inside some bacteria under the conditions of excess carbon and limited nutrient availability. Researchers are developing processes to make PHA at a commercial scale, typically involving bacteria strains that have been genetically modified to boost production and to accept a carbon source of corn-based sugar. The microorganisms feed on the plant-derived sugars and produce PHA. The PHA is then separated from the bacteria and made into pellets that can be molded into plastic products.

However, that approach has several shortcomings: It requires use of agricultural land and other inputs to produce feedstock, and it competes with the food supply.

Mango Materials' process uses bacteria grown in fermenters to transform methane and oxygen, along with added nutrients (to supply excess carbon), into PHA. Eventually, the PHA-rich bacteria — now literally swollen with PHA granules — are removed from the fermenters, and the valuable polymer is separated, via proprietary techniques, from the bacteria. The PHA is then rinsed, cleaned and dried as needed.

After the products made from the PHA have reached the end of their useful life, the plastic can be degraded anaerobically (without air) to produce methane gas. This closes the loop and provides a fresh feedstock for PHA production. Because PHA's properties can be tweaked by varying the copolymer content or with additives, Mango Materials has identified a range of applications.

"We are currently focused on applications where biodegradability is key," says Molly Morse, CEO at Mango Materials. "However, we're open to all sorts of applications and are eager to bring PHA bioplastics to market."

This unique approach addresses challenges that have derailed previous attempts at PHA commercialization. Other processes use sugar as a carbon feedstock, whereas Mango Materials uses waste methane — which is considerably less expensive than sugar. "By using methane gas as the feedstock, we can significantly drive down costs of production," Morse says.

"This stands in contrast to the processes many biotech companies use that require high-purity, genetically engineered cultures," says Allison Pieja, Director of Technology at Mango Materials. As an added environmental benefit, the process sequesters methane, a potent greenhouse gas, and provides an economic incentive for methane capture at facilities such as landfills, wastewater treatment plants and dairy farms.

The unused, vented methane from California landfills (based on 2010 data from the Methane to Markets Partnership), if used as PHA feedstock, would yield more than 100 million pounds of plastic per year. (This estimate is based on Mango Materials' internal calculations using its own rates and yields).

Mango Materials has vetted this technology and achieved excellent yields at the laboratory scale. Field studies have shown that the methane-consuming cultures grow just as well on waste biogas, which includes contaminants such as sulfides, as on pure methane. Now, the company is setting out to achieve the same yields at a commercial scale. The company's standard commercial plants will be sized to handle the methane produced at an average wastewater treatment plant — enough to produce more than 2 million pounds per year of PHA.

This technology was funded through the NSF Small Business Innovation Research (SBIR) Program. This article was prepared by the U.S. National Science Foundation for the American Institute of Chemical Engineers and appeared in the February 2014 issue of Chemical Engineering Progress. Follow all of the Expert Voices issues and debates — and become part of the discussion — on Facebook, Twitter and Google +. The views expressed are those of the author and do not necessarily reflect the views of the publisher. This version of the article was originally published on Live Science.