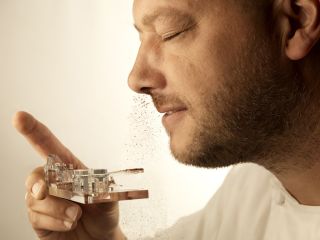 In a bizarre new trend in certain circles, people are snorting chocolate powder through their noses with the aid of a machine. But some experts say the practice may be dangerous and that people should not snort any type of powder.

The man behind the "chocolate shooter" is Belgian chocolatier Dominique Persoone. His company, The Chocolate Line, makes a device that is basically a tiny catapult, with two small, spring-loaded spoons that fling cocoa powder into the nostrils.

"You load it like a gun, putting very little chocolate mix on the machine … Then, you push, and pfffff! The chocolate blows in your nose," Persoone told Live Science. [7 Sweet Facts About Chocolate]

A hit of cocoa

Usually, when people taste something on their tongue, they can detect only a few flavors, including sweet, salty, bitter, sour and umami (savory). In contrast, the human nose can detect more than 1 trillion different scents. Sniffing chocolate is "another way of tasting it," Persoone said.

"We did some tests sniffing pure chocolate, but it was not strong enough," Persoone said. "Then, we mixed the chocolate with chili pepper — that hurt a lot."

The inventors finally settled on a mixture of dry mint, ginger and chocolate, and went to a hardware store for the materials to build their own chocolate-snorting machine.

Before long, Persoone said, "everybody wanted to have that machine." In the 10 years since that time, his company has sold more than 25,000 of the devices to people all over the world, he said.

Still, some experts say the unusual practice is risky.

"Snorting chocolate powder is not safe, because the powder is perceived by the nose as a foreign toxic substance," said Dr. Jordan Josephson, an ear, nose and throat and sinus specialist at Lenox Hill Hospital in New York City.

The powder can damage the microscopic hairs, or cilia, and membranes of the nose, causing problems with their ability to work correctly, as well as possible scarring, Josephson told Live Science in an email. It is not safe to snort any powder, he added. "Putting any foreign bodies — including smoke, cocaine and/or chocolate powder — is not safe and is not advised," he said.

The chocolate shooter comes with a warning in the box to not sniff too much, Persoone said. And he doesn't recommend letting children use the device.

If a person snorts chocolate, how does it affect the brain?

Persoone claimed that consuming chocolate releases chemicals in the brain that produce feelings similar to those "after an orgasm."

But Josephson said there is no science-based evidence that snorting chocolate can give you a high, he said.

Persoone emphasized that the chocolate being snorted has to be pure cocoa. "You can't just start sniffing Nesquik," he said. However, some of his friends have used his machine to snort other types of food. For example, some snort dried basil before eating a tomato mozzarella salad.

But Josephson isn't convinced. "I do not advise snorting any powder products," he said. "I recommend eating mints or basil and chocolate, and getting the desired effects the old-fashioned way."