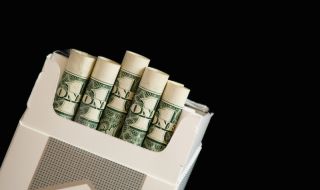 Smoking a pack of cigarettes a day will cost a person upwards of $2 million in tobacco costs and other expenses over his or her lifetime — at least according to a study conducted last month by WalletHub, a financial advice website. But is that claim true?

The study says the main driver of this exorbitant price tag was the "tobacco cost per smoker," which WalletHub estimated to be between $800,000 and $1.5 million, depending on which U.S. state a person lives in; cigarettes are the cheapest in South Carolina and most expensive in Alaska.

The study's numbers were shocking. And although WalletHub's calculations were posted on its website and not in a peer-reviewed journal, the study was widely reported by news outlets, even financial websites.

Yes, the results are shocking. But are they true? Not at all. From a public health perspective, this cost is inflated by at least a factor of 10.

The primary reason the WalletHub number is inflated is that the company's calculation is based on the idea that if smokers weren't spending their money on cigarettes, they would be investing every penny of it and that their investment would give them a 7 percent rate of return for 51 years. (The 51 years, by the way, does indeed reflect a sad truth that someone who starts smoking a pack daily at age 19 likely won't live past age 70. The 7 percent rate of return is the historical average annual return of the S&P 500, which is generally considered a good measure of the stock market returns.)

If that were the case, then presto! A person could be a millionaire by age 70. [Kick the Habit: 10 Scientific Quit-Smoking Tips]

But as any 70-year-old lifetime nonsmoker on a fixed income will tell you, it just doesn't work that way.

In fact, public health experts don't speculate about costs this way when they calculate the societal impact of smoking, for two reasons: No one diverts all the money that would have been spent on a bad habit into an investment, and investing money offers no guarantee for such a high financial return.

Still, smoking clearly is unhealthy and costly, for society and the individual. So, let's do the straight math.

The price of cigarettes varies greatly from state to state, and country to country. Assuming a $6-per-pack average (the American Lung Association estimates $5.51) and for simplicity, like the WalletHub study, disregarding inflation, the cost would be $6 per day, times 365 days, times 51 years — a total of $111,690.

That's a hefty hunk of change, and this alone should alarm smokers. But to grow that sum to more than $1 million, you would need to be diligent about investing that $6 per day, or $2,160 per year, and pray for an average rate of return of 7 percent over 51 years.

WalletHub's calculation is based on something called the "latte factor" — the notion, largely discredited by financial planners, that if you cut back on a store-bought latte each day, you would be a millionaire in the future.

Cost calculations in the public health realm don't employ the latte factor. For example, the average cost of raising a child is about $25,000 a year, according to the USDA. This does not mean that not having a child will make you a millionaire in 20 years. If this were true, you could choose not to have twins and have nearly $2 million in 20 years!

WalletHub conceded as much.

"We did not conduct this study based on a smoker versus nonsmoker approach," WalletHub told Live Science via email. "We assumed that a smoker saved the amount spent daily on cigarettes and avoided some of the extra costs associated with smoking and, in the end, added up how much money that person could save."

Another questionable element of WalletHub's cost calculation is "the costs for victims of secondhand-smoke exposure," as stated in its report. "This approach assumes that, in a perfect society, smokers would also pay the costs related to the harmful smoke that tobacco releases into the air," the study authors wrote.

But alas, we don't live in a perfect society, so one cannot add these costs to an individual's financial burden from smoking, because they are not tangible costs, and the smoker isn't being burdened by them.

Even the health cost associated with smoking is widely speculated. WalletHub calculated costs between $100,000 and $200,000 depending on the state where one lives, based on a recalculation of data from the Centers for Disease Control and Prevention at a population-wide level.

However, previous estimates haven't been close to this level. Last year, the Campaign for Tobacco-Free Kids updated a well-established calculation made in the 1990s by Thomas Hodgson, a CDC scientist. This group found the lifetime health costs to be $21,000.

To its credit, the WalletHub calculation included some expenses that some smokers might not realize: the extra cost of health insurance, life insurance, homeowners insurance and possible loss of income as a result of absenteeism or workplace prejudice against smokers.

(Actually, there are more costs not included in the WalletHub calculation, such as cleaning costs, lower trade-in value for cars and shorter life for electronic equipment sullied by smoking residue.)

So, what is the lifetime cost of a pack-a-day smoking habit? You can assume you'll burn through about $100,000 for the cigarettes. Beyond that, costs are very speculative.

Editor's note: This column was updated on Feb. 6 to indicate the fact that the 7 percent rate of return is the historical average of the S&P 500.