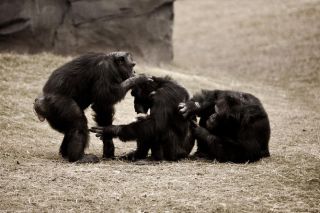 This ScienceLives article was provided to Live Science's Expert Voices: Op-Ed & Insights in partnership with the National Science Foundation.

Ever since Sarah Bronson had her first scientific interaction with a lizard that she caught herself, she has possessed an enduring interest in the scientific process. Now, as an associate professor of psychology, philosophy and neuroscience at Georgia State University and director of the Comparative Economics and Behavioral Studies Laboratory, Brosnan does research with nonhuman primates as well as with human children and adults at the Language Research Center of Georgia State University and the Michale E. Keeling Center for Comparative Medicine and Research of the UT/MD Anderson Cancer Center.

Brosnan’s interests lie in the complexities of social behavior and cognition. More specifically, she studies primates and their social interactions, in particular decision-making involving cooperation, inequity, and bartering, primarily using economic games. If you have ever seen the famous video in which a capuchin monkey strenuously objects to receiving unequal pay (a cucumber as opposed to a grape), you are familiar with this line of inquiry. You can watch Brosnan conducting the experiment here.

By studying primates, Brosnan works to understand the evolution of cooperative and economic decision-making so as to better understand how and why humans make the decisions that they do. Using an experimental economics approach allows for a standardized methodology that she can use to compare different non-human species as well as humans, which allows for more profound insight in to the evolution of decision-making behavior. In the video accompanying this article, Brosnan talks about her work.

Follow all of the Expert Voices issues and debates — and become part of the discussion — on Facebook, Twitter and Google+. See the ScienceLives archive. The views expressed are those of the author and do not necessarily reflect the views of the publisher. This version of the article was originally published on Live Science.