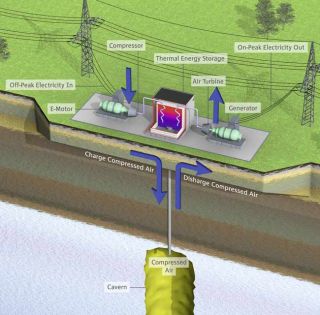 A diagram of a possible advanced adiabatic CAES system. Energy from off-peak electricity is stored underground as compressed air. Heat from the compression is also stored and reused to make the system more efficient.
(Image: © RWE Power.)

Editor's Note: Each Wednesday LiveScience will examine the viability of emerging energy technologies — the power of the future. This is the first installment.

Wind power is unreliable. No one can turn up the wind every time electricity demand peaks. So some utilities are looking at ways to bottle up the wind's energy and store it underground for later use.

"The wind blows a lot at 2 in the morning, so it makes sense to save it and use it at 5 in the afternoon when everyone comes home from work," said Georgianne Peek of Sandia National Laboratories in New Mexico.

Compressed air energy storage (CAES) uses off-peak electricity from wind farms or other sources to pump air underground. The high pressure air acts like a huge battery that can be released on demand to turn a gas turbine and make electricity.

However, a good portion of the input energy is lost in this process, making CAES one of the least efficient storage technologies available.

"Nobody really wants to store electricity unless they have to," said Roland Marquardt of RWE Power, a German utility company.

So, RWE and General Electric (GE) recently announced plans to develop a new type of CAES technology that will be more efficient, as well as having zero greenhouse gas emissions.

Storing off-peak electricity is not new. By far the most common method is to pump water up to an elevated reservoir and then release it to drive an electric generator when demand calls for it.

Once "charged," these pumped hydro systems — of which around 300 exist worldwide — can supply 1,000 megawatts of power for several hours. However, there are few places left with available water and the right topography, Marquardt said.

CAES can supply around 100 megawatts of power for several hours, and the needed geological formations (abandoned mines, salt caverns, aquifers) can be found around the world.

Other storage devices, such as batteries and flywheels, cannot store nearly the same amount of energy and are much more expensive to install than CAES.

Currently only two operating CAES facilities exist in Germany and Alabama. They each use salt caverns with several hundreds of thousands of cubic meters of space (roughly the volume of 100 Olympic-sized swimming pools).

"CAES is a well-known technique, but it's not commercially viable at the moment due to its low efficiency," Marquardt said.

To improve the efficiency, RWE and GE are working on a new design called advanced adiabatic CAES (AA-CAES), in which the heat that is removed from the air during compression is stored and later used to reheat the gas as it is discharged.

"In this case, the air is hot enough to drive an air turbine without using combustion gases," Marquardt said.

The efficiency could be increased to 70 percent, and if combined with wind power, an AA-CAES system would release no carbon dioxide, a major driver of global warming.

RWE and GE are currently doing a feasibility study looking in particular at what material would be best for storing the immense heat. Marquardt thinks the likely choice will be ceramic bricks, but a possible alternative solution is a bed of rock pebbles.

Once the technical difficulties are all ironed out, Marquardt expects a first demonstrator project — supplying around 30 megawatts of power — sometime around 2012. The future goal is to have an AA-CAES facility that can supply 10 times that.

In the United States, traditional CAES is being considered by several companies, but only one new project, the Iowa Storage Energy Park (ISEP), is in the design stage. Funded by a group of municipal utilities, ISEP would store enough wind and off-peak energy to supply 270 megawatts of power for 16 hours each day.

Because CAES can stabilize the power output from a variable source, it could help make wind energy more attractive. But CAES "doesn't have to be coupled with renewables to be a green technology," Peek said.

She explained that CAES can also store off-peak electricity from traditional coal-fired power plants. This allows the plants to run at a steady optimum pace, rather than ramping up and down to meet consumer demand. And this steady pace means less carbon dioxide emissions.

"I like to say that CAES is a green-enabling technology," Peek said.