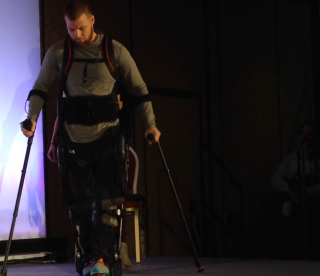 One man with a partial spinal cord injury, Shane Mosko, demonstrated here today (Jan. 8) at the 2015 CES how the new bionic legs operate, using a system produced by Ekso Bionics, of Richmond, California.

More than 3,500 patients with either spinal cord or stroke injuries have walked more than 15 million steps with the device, said Russ Angold, the co-founder and chief technology officer of the company. [Video: Bionic Legs Help Spinal Cord Patient Walk]

Since the 1890s, inventors have imagined and sometimes patented Ironman-like suits that could give a wearer superhuman strength. In the 1960s, GE even developed a giant, unwieldy, and tethered version of an exoskeleton, but rumors at the time held that the company was too afraid to turn it on with a human inside of it, Angold said.

But in 2000, things really took off — the Defense Advanced Research Projects Agency (DARPA) began funding exoskeleton projects. The first ones were designed for soldiers, who routinely suffer from chronic back, hip and knee complaints from shouldering 135-pound (61 kg) packs on their backs all day, Angold added.

Ekso Bionics has been working on its project for more than a decade, he said. The first version required 2,500 watts of power and a giant backpack full of motors and batteries to operate. But the company also developed much smaller devices, called passive walkers, which can support a person's body weight and sip just 4 watts of power. Later, the company designed a mid-level device that gives a wearer some active assistance in walking, and uses about 250 watts of power, which is now being developed by Lockheed Martin.

The new device, called the Ekso, is now helping stroke patients learn to walk again, Angold said. People who suffer from stroke often have to be helped to their feet by three people, who must hold the patient between two parallel bars, and the person often gets tired after just a few steps. In addition, a person who has had a stroke may have levels of strength and muscle control that differ on the right and left sides of their body.

The Ekso can provide different power levels to either leg, responding to the patient's strength. With the bionic suit, patients can walk hundreds of feet when they first stand up. They aren't concerned about getting tired, and the variable strength means they don't favor one side as they would if they were walking on their own, he said.

"Repetitive and intense practice is a key factor in improvement in walking function," because it helps retrain the brain pathways that control walking, Angold said.

The new exoskeleton can also help people with spinal cord injuries, like Mosko, who uses a wheelchair but has partial sensation and some use of his legs.  The technique can allow them to build and preserve their muscle strength, and can help undo some of the health ailments that can come with being in a chair all day long.

"It can really isolate those hip flexors and [quadriceps], and work on strengthening those muscles without working to fatigue," Mosko told the crowd.

Right now, the devices are too expensive for consumer use, and just a few hundred versions of the bionic legs are being used by physical therapists. But the company is also developing simpler exoskeletons that could be used to help the elderly walk around without tiring, or to allow those doing extreme sports to get ever-more extreme, Angold said.

The company has also built bionic, passive exoskeletons to help construction and manufacturing workers hold heavy tools without fatiguing their arms, he said.