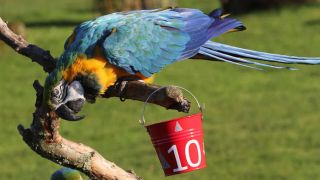 'Tis the season to be jolly, and what could be more jolly than amusing animal stories? From Christmas tree lights powered by electric eels to the "magical" origin of flying reindeer, here are some of our favorite holiday critters.

Zoos and aquariums have come up with some creative holiday exhibits in the past, but this one ranks among the best: An aquarium in Kamakura, Japan, allured guests with a Christmas tree tastefully lit with electricity from electric eels. The eels' tank contained two aluminum panels, and each time the animals moved, they generated enough electricity to power one string of flashing white lights on a 6.5-foot (2 meter) tree, Reuters reported in 2010.

Electric eels have organs with special power-storing cells that work like tiny batteries. When the eels are hunting or feel threatened, the cells discharge a burst of about 600 volts — five times as much power as a standard U.S. wall socket. A recent study revealed how the animals use the shocks to remotely control their prey. [Boo at the Zoo: Animals Get Their Spook On]

Perhaps the only thing that can counteract the ugliness of holiday sweaters is an adorable animal, like the sheep that was found wandering the streets of Omaha, Nebraska, sporting a Christmas jersey. The story and photos of the sheep went viral earlier this month, with the hashtag #ChristmasSheep.

"If you're missing a sheep that enjoys wearing Christmas Sweaters, he's here at NHS," the Nebraska Humane Society (NHS) posted on Facebook.

The animal, named Gage, was reunited with its owner, who learned about the animal's location from the buzz on Facebook, according to Omaha.com. Guess it couldn't pull the wool over its owner's eyes forever.

Everyone likes Christmas lights, especially to … eat? Apparently, no one told the squirrels at the Cincinnati Zoo and Botanical Garden that the lights are not edible — they were found munching on some Christmas light wires.

The gnawing on wires is a problem year-round, according to WCPO.com, and groundskeepers have been trying all sorts of creative methods to keep the pesky critters away. They even tried spritzing hot sauce on the wires, but it didn't stop the squirrels, whose antics cost the zoo about $5,000 a year.

Some Christmas traditions include Advent calendars as a way to count down the days until the holiday, but why should humans have all the fun? The Zoological Society of London created "calendars" for their furred and feathered tenants by filling red and green buckets that were labeled for the days in December.

The buckets contained the animals' favorite fare: Penguins got fish, while meerkats got crickets. The animals took to the treats with gusto, the Irish Examiner reported.

Everyone knows the story of Santa Claus and his reindeer, but how did this myth get started? One theory is that Santa was inspired by shamans in Siberia and other Arctic regions who would give out hallucinogenic mushrooms around the time of the winter solstice.

Reindeer are common in these Northern areas, and Siberian tribesman who ate the magic mushrooms may have hallucinated that the antlered creatures were flying, Donald Pfister, a biologist at Harvard University who studies fungi, told Live Science in an interview in 2012. The reindeer are known to eat the mushrooms too, and mystics would sometimes drink the animals' urine as part of religious rituals.

"Whoever heard of reindeer flying? I think it's becoming general knowledge that Santa is taking a 'trip' with his reindeer," Carl Ruck, a professor of classics at Boston University, told Live Science. But some anthropologists think the story is just a load of reindeer excrement.

Warning: Don't try this at home. In mid-December, the Loveland Living Planet Aquarium in Draper, Utah, sent Santa and his helper on a dive into its 300,000-gallon (1.1 million liters) shark tank.

Not all of the animals were amused. During a dive, "One of the turtles came up [as if to say] 'Hey, what are you doing?" Dobson told Live Science.

Editor's Note: If you have an amazing holiday animal photo you'd like to share for a possible story or image gallery, please contact managing editor Jeanna Bryner at LSphotos@livescience.com.