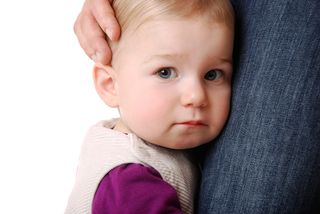 It's fine to be shy, as long as Mom and Dad are looking out for you, new research suggests.

Shy babies and toddlers are at greater risk of developing anxiety later in life, compared with outgoing kids. A new study, however, finds that good parenting can offset that risk for little wallflowers.

In fact, shyness and withdrawal from new situations is linked to later anxiety only in babies and toddlers without a secure attachment to their caregivers, according to new research published today (Dec. 18) in the journal Child Development. A secure attachment is a warm, nurturing relationship in which kids feel confident to explore when their mom or dad is around, and also feel comfortable seeking reassurance from them when upset. [10 Scientific Tips for Raising Happy Kids]

"For those [kids] that do show inhibition across many years, having a secure attachment could be really protective," said study researcher Erin Lewis-Morrarty, a research associate in child development at the University of Maryland.

Parents can work to develop that secure attachment by being nurturing and responsive to a child's distress, Lewis-Morrarty told Live Science.

About 15 to 20 percent of children have a temperament that researchers call "behavioral inhibition." On the playground, they may hang back from other kids. As babies, they react negatively to new stimuli. Previous studies have found that kids with behavioral inhibition are at increased risk of having anxiety disorders by age 7.

And yet, most behaviorally inhibited kids don't develop anxiety disorders — and some teens and adults with anxiety weren't inhibited as kids. Clearly, something else is going on.

"We're interested in trying to determine which kids are most at risk," Lewis-Morrarty said.

The findings point to parenting. Children in the study who were both behaviorally inhibited throughout childhood, from age 14 months to 7 years, and who also had insecure attachments with their caregivers, were more likely than other kids to develop anxiety between ages 14 and 17. In contrast, children who were behaviorally inhibited but had a secure attachment with their caregivers (usually mothers, in the experiment), were not at greater risk of developing anxiety later in life.

The researchers looked at 165 kids ages 14 to 17 who had participated in temperament experiments as children. The researchers had observed the toddlers at ages 1 and 2 as they were exposed to new environments and interacted with new objects, such as a mechanical robot. The kids were also momentarily separated from their parent so that researchers could determine the parent-child attachment.

A child who was securely attached, for example, might have become upset when his or her mom or dad left the room. But when the parent returned, the child would go to the parent and be comforted.

An insecurely attached child could ignore their caregiver after the separation, or seek him or her out but remain angry and upset. In some cases, the child could even show fear or anxiety around the returned parent.

As teenagers, the study participants filled out questionnaires about their anxiety symptoms. The researchers found that shy children who were "insecure-resistant" as kids (meaning they went to their parents for comfort but were unable to calm down) were the most at risk for later anxiety. Shy boys were at higher risk than shy girls, perhaps because shyness is less socially acceptable for boys than for girls, Lewis-Morrarty said.

The results highlight the protective role of a strong parent-child relationship, and could be used to identify at-risk kids or to teach parents how to foster that loving bond, Lewis-Morrarty said.