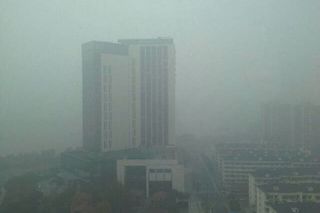 Raghu Murtugudde is executive director of the Chesapeake Bay Forecasting System at the University of Maryland Earth System Science Interdisciplinary Center (ESSIC) and a professor in the Department of Atmospheric and Oceanic Science. Murtugudde contributed this article to Live Science's Expert Voices: Op-Ed & Insights.

It was in 1992 that the world first came together, in Rio de Janeiro, to address global warming through the United Nations Framework Convention on Climate Change (UNFCC). That was followed by Kyoto in 1998, where the eponymous climate protocol was established, with annual Conference of Parties (COP) gatherings to push towards progress. Now, all eyes are on the 21st such conference in Paris next year, COP21, a session responsible for crafting the follow-on to Kyoto, which expired in 2012.

The cornerstone for all negotiations remains helping nations cut carbon emissions, but as occurred too often, other factors such as financial crises can easily derail the journey towards what climate advocates call deep decarbonization.

Does everyone deserve an industrial revolution?

The Industrial Revolution that elevated the standards of living and lifespan for all of humanity, albeit unequally, was founded on fossil fuels and an unintended consequence was global warming. The majority of the accumulated carbon has come from the developed world, but developing countries such as Brazil, South Africa, India and China (often grouped together with the designation BASIC) are on the same carbon-intensive economic growth right now. Decarbonization of those economies does not offer a promising pathway for the future, as it is the first sacrifice at the altar of economic concerns.

The issues facing BASIC nations and the rest of the developing world are often even more immediately existential than carbon emissions. Water and food dominate survival strategies , even in the absence of climate change, since climate variability itself offers day-to-day challenges in countries that rely on large-scale rain fed agriculture in Africa and Asia. Several recent publications from India's own scientists, point to a downward trend in that nation's summer monsoon season — a weather phenomenon that accounts for nearly 80 percent of the country's total annual rainfall. The studies suggest that the annual rainy seasons are weakening, having produced less and less rainfall over the past 50 years. With further declines in rainfall expected to continue, this issue is a far graver concern than decarbonization. Worse, the climate models used by the U.N. Intergovernmental Panel on Climate Change (IPCC) to make climate projections are unreliable in their depiction of the future monsoon. And, tens of millions of people in India and hundreds of millions of people in Africa remain without electricity, which exacerbates the climate impacts on the water-food-energy nexus.

The developing world thus needs to focus on solutions at COP21, and those solutions must address the intimate nexus between water, food and energy — and the deep links that now exist among national economies. Typhoon Haiyan, which battered the Philippines in November 2013 and affected the region's export of commodities such as coconuts. This disruption to the supply chain reverberated throughout the world, including the United States. [Michael Mann: Super Typhoon Haiyan and the Realities of a Warmed World (Op-Ed )]

Additionally, civil and armed conflicts are rise with even temporary climate perturbations, such as El Niño . Vulnerabilities to climate can thus become national security threats and the rapid economic growth of one country may well be handicapped by the climate vulnerabilities of its neighbors.

Not all climate solutions need massive investments. It behooves the developing world to remember some of the bottom-up solutions that used to be their own cultural practices. For example, agroforestry as practiced in much of Africa and Asia since the beginning of agriculture is an approach that combines agriculture with forestry and horticulture. It has proven time and again to be a sustainable method for watershed management and food production that greatly enhances soil moisture persistence and drought resilience. It also sequesters additional carbon in the soil and in vegetation and is an approved UNFCC Clean Development Mechanism, which provides financial rewards for putting such methods into practice. It is a no-brainer that large-scale adoption of agroforestry can simultaneously boost water and food security for the developing world while improving those communities' carbon footprints.

While BASIC members have made substantial investments in renewable energies, other developing nations do not have the economic wherewithal, or even the basic infrastructure for conventional energy. While alternatives such as appropriate technology initiatives can overcome some limitations, the developed world has yet to fully commit to technology transfer and capital investments.

Decreasing monsoons over India may suggest winds are weakening in that region, negating massive investments into wind energy. Reliable, regional, climate forecasts and projections are needed for infrastructure investment decisions since global models do not have the regional resolution to address such concerns.

The BASIC nations have invested in science education to develop a climate knowledge-base and better forecasting efforts. But their technology education investments are typically focused on economic growth and not necessarily on climate solutions. Education is a key component of the overall strategy for climate adaptation — especially for women. This is, in part, because studies have shown time and again that a side benefit of education for women and girls is the stabilization of a nation's population growth and a slowing of demand for resources. Significant investment in education is needed in all developing nations, but BASIC countries must also pay more attention. Much of the economic growth and industrial activities of those countries currently rely, heavily, on imported energy sources — only indigenous research and development can sustain those nations' ambitions for continued and sustainable development.

Optimism about meaningful outcomes from COP21 are high following the U.S. — China agreement about reducing carbon footprints, and peer pressure is building upon India, the third-largest carbon emitter, to follow suit. But all countries remain slaves to their own economic growth imperatives, underscoring the need for a solution-based strategy for COP21. This is especially important for the developing world: Its vulnerability is a global one.