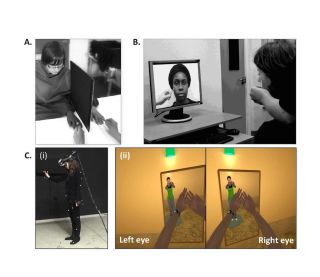 (A) The Rubber Hand Illusion; (B) The Enfacement Illusion; (C) Immersive Virtual Reality: (i) A participant wears the head-mounted display, (ii) The participant's view of the situation.
(Image: © Trends in Cognitive Sciences, Maister et al.)

A futuristic virtual-reality exercise could bring new meaning to the saying "don't judge a man until you've walked a mile in his shoes." In the exercise, people can "swap bodies" with someone of a different race or age.

In such "virtual body swapping," people wear a headset that immerses them in a world in which they inhabit a body other than their own. Now, psychologists are using this technology to study the interactions between the brain, the body and societal biases.

One key finding of the recent research is that people's negative attitudes about other groups can be changed, said Manos Tsakiris, a professor at Royal Holloway University of London and one of the authors of a new paper on the technology published today (Dec. 15) in the journal Trends in Cognitive Sciences.

"Once you change people's representations of what their bodies are like, then you can change their social cognition, which is the way in which we relate to others," based on their appearance or behavior, Tsakiris said.

In several studies conducted over the past five years, researchers coupled virtual body swapping with questionnaires that reveal participants' biases toward other people. The idea is to combine what researchers know about people's physical self-awareness (i.e., how a person views one's self visually or tactically) with what they know about how people view those who are physically different from them, either because of race, age, gender or body type. [10 Science Discoveries to Be Thankful for]

Social psychologists have long been studying biases and prejudices, but most studies have focused on how biases form, and how they affect peoples' behavior, Tsakiris told Live Science.

"What we didn't know was whether we can actually change peoples' beliefs and attitudes," Tsakiris said.

In a recent study led by Mel Slater, a professor of virtual environments at the University of Barcelona and co-author of the new paper, people with light skin completed questionnaires aimed at revealing their biases toward black people, and then embodied either black or other white avatars via a virtual body- swapping display. After the virtual swap, the participants were quizzed again.

In other words, walking a mile in a black avatar's shoes made white people less likely to judge black people in a negative way, the researchers said.

In another study, researchers led by Tsakiris used a different sort of body-swapping exercise, known as the "rubber hand illusion." For this exercise, a rubber hand was placed in front of a participant, while one of the participant's own hands was covered to block it from view. The person conducting the study then stroked the same points on both the rubber and real hands with a paintbrush.

About three-quarters of participants said they experienced a feeling that the rubber hand was actually their own hand. And, if the rubber hand was threatened in some way (say, by a pointy object) the person felt heightened levels of stress, as if their real hand were about to be harmed.

"One would expect that the kind of beliefs or attitudes you have about other people might influence the way you process information," Tsakiris said. "And it does. But when it comes to processing information about [what you perceive to be] your own self, it doesn't really matter."

This finding is important because it leads to a better understanding of how biased attitudes and prejudice work, and how they might be reversed, Tsakiris said. Getting a person with strongly racist views to change their opinions might be easier with some help from a virtual reality game, akin to the body- swapping exercise.

But these findings also have a broader implication, Tsakiris added. They prove that the brain likes to integrate sensory information from different bodies, he said.

"What we should do at the larger scale — at the societal level — is create the conditions that will allow people to integrate with people from other groups," Tsakiris said.