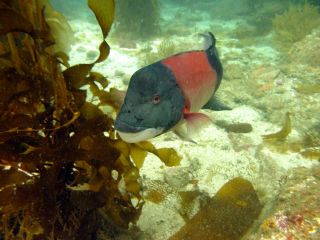 A sex-changing California fish is growing bigger and gobbling up more sea urchins after a decade of being protected from fishing, a new study finds.

In the Channel Islands offshore Southern California, the sheephead fish population has bounced back from overfishing since marine protected areas were established around the islands in 2002. Biologists are finding more large males and more egg-producing (larger) females.

And the bigger fish have bigger mouths, which is all the better for breakfasting on the rampant, kelp-destroying populations of sea urchins in the region. An 8-inch (20 centimeters) sheephead fish has a diet that is only 2 percent urchin, whereas an 18-inch (45 cm) sheephead munches on so many urchins that they make up 30 to 40 percent of its diet, according to the study, published Dec. 10 in the journal Proceedings of the Royal Society B.

"Sheephead are very important players in the kelp forest," study co-author Jenn Caselle, a biologist at the University of California, Santa Barbara, said in a statement. "By keeping urchins in check, they maintain healthy kelp, which, in turn, provides habitat for many, many other species."

Kelp beds disappeared from California in the early 20th century, as the predators of urchins were hunted or fished by the thousands. Urchins nibble off the anchors that hold kelp in place, and without their predators, their population exploded, and kelp forests vanished.

The California sheephead lives in kelp beds and rocky reefs stretching from Monterey (in central California) to Baja, Mexico. Every sheephead is born female, and then changes sex to male after growing large enough to defend a territory. (But the presence of a nearby dominant male inhibits this switch.)

Caselle and lead study author Scott Hamilton, a professor at Moss Landing Marine Laboratories in California, have studied the effects of fishing pressure on the sheephead population since 2007. Using some 30 years of historical records, the researchers previously found the fish were shrinking, and changing sex at an earlier age and at smaller sizes.

The overall population shrank in number and size as well. [Photos: The Freakiest-Looking Fish]

The new study shows that sheephead populations are recovering where regulations have limited commercial and recreational fishing. And by analyzing the sheephead's gut contents, the researchers found that bigger sheephead were eating more sea urchins than smaller fry.

"That's probably because large sheephead can physically handle the urchins," Caselle said. “We call it gape size, meaning their mouth is big enough to get around them."

In areas with plentiful food supplies, such as the western Channel Islands, sheephead fish can grow up to 3 feet (91 cm) long.

"It's a really iconic species in our local kelp forests, and it's fascinating because it's big, it's beautiful and it changes sex," Caselle said.