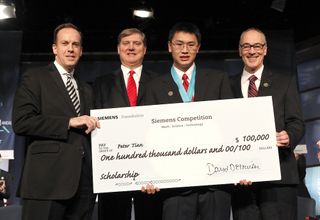 Peter Tian, a senior at The Wellington School in Columbus, Ohio, took home the $100,000 grand prize in the individual category for mathematical research on pattern avoidance for multidimensional matrices.
(Image: © Siemens Foundation)

Mathematical research that could help drones navigate, and computer models for how trees growsnagged top honors at a national student math and science competition, the event's organizers announced today (Dec. 9).

Twenty of the nation's brightest high school students descended on Washington, D.C., over the weekend for the 15th annual Siemens Competition in Math, Science & Technology at The George Washington University.

Peter Tian, a senior at The Wellington School in Columbus, Ohio, took home the $100,000 grand prize in the individual category for mathematical research on pattern avoidance for multidimensional matrices — a subject with applications for how drones or self-driving cars navigate in 3D environments. [Creative Genius: The World's Greatest Minds]

"Peter's research significantly advances the knowledge of this topic and opens a new area for exploration," James Haglund, a mathematician at the University of Pennsylvania, said in a statement.

"Eli and Albert were able to develop graphics that were so advanced [that] they enabled biological modeling for real trees and situations," Randy Wayne, an agricultural scientist at Cornell University, said in a statement.

The students have a range of hobbies and interests outside of their research. Tian is a Research Science Institute scholar and attended the Mathematical Olympiad Summer Program. When he's not doing math, Tian runs for his school's cross-country team, plays alto saxophone and volunteers at the Center of Science and Industry. His goal is to become a mathematics professor.

Echt-Wilson is the spokesman for the New Mexico Supercomputing Challenge, and was awarded the Botanical Society of America's "Best Student Physiological Paper." In his free time, he plays the ukulele and guitar, performs magic, and plays tennis and soccer.

Zuo helps coach a math competition team for middle school children in Albuquerque, and was awarded the Botanical Society of America's "Best Physiological Research Presentation." His hobbies include tennis and chess, and he is bilingual.

"I like making the world a more interesting place; stuff that we used to see only in science fiction can now become a reality," Zuo said in a statement.

The finalists of six regional Siemens Competitions took part in the national science competition. The keynote speakers at this year's event included Anthony Fauci, director of the National Institute of Allergy and Infectious Diseases (NIAID), and NASA aeronautical engineer Aprille Ericsson, among other science and tech leaders.

The Siemens Competition is one of the nation's most prestigious high school science competitions. A total of 2,263 students submitted 1,784 projects for the competition. Of these, 408 students were selected as semifinalists, and 97 went on to become finalists.