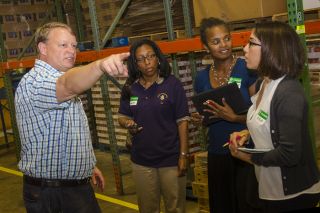 This Behind the Scenes article was provided to Live Science's Expert Voices: Op-Ed & Insights in partnership with the National Science Foundation.

For the past few years, a team of engineers has spent long hours poring over data files and complex computer models. They weren't designing nuclear reactors or high-tech cars — they were using their technology and expertise to improve programs that feed the hungry.

Food banks are enormous enterprises, serving as a linchpin for hunger relief efforts across the United States. But they are as complex as the nation's food system itself, collecting food from sources ranging from local farmers to charitable donations and distributing it to myriad agencies that then share it with people in need. Their goal is to do this as fairly and efficiently as possible. But, like many complicated systems, this is easier said than done. That's where engineering comes in.

In 2009, an ISE researcher at North Carolina A&T State University named Lauren Davis contacted Ivy with an idea. One of Davis's students was volunteering at an area food bank and had noticed inefficiencies in the system. What did Ivy think about working with food banks to make them run more smoothly?

That conversation launched a National Science Foundation-funded project that plunged Ivy, Davis, and a team of fellow researchers into the intricacies of how food banks operate.

To get a handle on food bank operations, the researchers teamed up with the Food Bank of Central and Eastern North Carolina (FBCENC), based in Raleigh, and the Second Harvest Food Bank of Northwest North Carolina, based in Winston-Salem. Both food banks serve extremely large areas and work with many partners. For example, FBCENC alone works with more than 800 agencies to feed more than 550,000 people in 34 counties covering hundreds of square miles.

Each food bank is dedicated to providing its partner agencies with its "fair share" of the food that is available.

The fair share is determined with a formula designed to ensure each agency receives food in proportion to its overall need. For example, if a county has 17 percent of the need within FBCENC's service area, FBCENC wants to make sure that the agencies in the county receives 17 percent of the food.

"But, as we learned, it can be difficult to meet that 'fair share' standard," Ivy says.

"The supply is primarily generated from donations, which adds a degree of complexity not typically present in for-profit supply chains," Davis adds. "The uncertainty associated with both the supply and demand processes make food distribution challenging."

Furthermore, some agencies aren't able to retrieve all their food. These limitations may be due to financial pressures, constraints on the availability of personnel, lack of access to adequate transportation, or limited storage space.

"An agency's limitations on receiving food can in turn constrain a county's ability to receive food," Ivy says. "We call these 'bottleneck' counties, because their fair share might be 17 percent, but they might only be able to collect and distribute 14 percent of the available food."

With support from three-year NSF collaborative research grants, Ivy and Davis assembled a team to collect food bank data, analyze it, and create computational models of supply and distribution processes. The team included Reha Uzsoy and Irem Sengul at NC State, Steven Jiang and Luther Brock at NC A&T, and Charlie Hale and Earline Middleton of FBCENC — as well as a host of undergraduates.

First, the researchers were able to characterize the role that bottleneck counties play in preventing food banks from meeting their fair-share goals.

"Food banks have historically focused on demand, and our work made clear that the capacity of agencies to retrieve and store food is actually a key factor in reaching fair share targets," Ivy says.

"If County A is unable to retrieve and distribute its fair share of the food, that food should not be wasted," Ivy says. "It makes sense to distribute that food in areas that have the capacity to make use of it. But then you need to help County A improve its capacity."

Lastly, the researchers developed a dynamic modeling technique that provides a more accurate picture of demand at the county level — which would help to make fair share calculations more precise.

"These findings are new, and we're in the process of determining how to implement them with our food bank partners," Ivy says. "But when we do, we think our work could be useful almost anywhere in the United States. That's because FBCENC is part of Feeding America, the largest network of food banks in U.S. As a result, its processes are similar to the processes of food banks across the country."

The researchers depicted in Behind the Scenes articles have been supported by the National Science Foundation, the federal agency charged with funding basic research and education across all fields of science and engineering. Follow all of the Expert Voices issues and debates — and become part of the discussion — on Facebook, Twitter and Google+. See the Behind the Scenes Archive. The views expressed are those of the author and do not necessarily reflect the views of the publisher. This version of the article was originally published on Live Science.