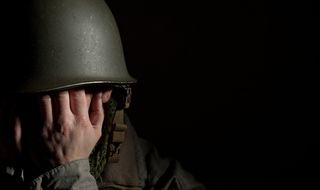 Triggers don’t only come on guns.
(Image: © Soldier by Shutterstock )

During World War I, severe post-traumatic reactions reached an epidemic scale that surpassed anything known from previous armed conflicts. The centenary of the Great War has reminded us of the tremendous suffering in the trenches – and coverage of the personal accounts of soldiers, their experiences at the frontline, their disfiguring injuries and the effects these had on their morale and family life cannot help but move.

But surprisingly, not much has been written about the often devastating consequences of this war on their mental health. Public perception of “shell shock” focuses on certain iconic clinical pictures that were popularised in contemporary medical films and later adaptations in media and fiction. You might have come across the “constant twitching and snorting and jerking” of Roald Dahl’s Captain Hardcastle, or mute Private Callan, whose treatment at Queen Square was (fictitiously) witnessed by WHR Rivers in Pat Barker’s novel, Regeneration.

Shell shock in the heart of London

My research focuses on the exact symptoms of traumatised soldiers, but also explores their personal histories, the events leading up to their breakdown, their journey through the medical system, and the reactions of doctors to this new challenge.

The complete set of medical case records covering the war years and post-war period were preserved in the archives of the National Hospital for Neurology and Neurosurgery at Queen Square in the heart of London. By the beginning of World War I, this renowned neurological hospital, referred to by contemporaries as “the temple of British neurology” had already gained an international reputation for the treatment of neurological disorders and pioneering neurosurgery in England.

The hospital received mental casualties from all over the world, including servicemen from Australia, Canada, South Africa, the US, Belgium, England, Ireland, Scotland and Wales.

The medical case records from between 1914 and 1919 reveal that in more than a third of the cases (38%), doctors could not find a medical explanation for the symptoms. And it is these 462 “shell shock” cases that I’ve analysed in more detail.

Soldiers with shell shock showed a wide variety of symptoms, ranging from deafness, bizarre gaits, violent shaking and paralyses to anxiety, depression, transient psychoses (with hallucinations and delusions) and flashbacks and nightmares which are classic displays of PTSD (post-traumatic stress disorder).

The breadth of these clinical presentations is surprising because it is generally assumed that PTSD mainly arose in later wars. Soldiers who developed shell shock were not necessarily involved in active fighting at the time. Several soldiers, who had coped well with life in the trenches, broke down during their home leave. Here, relatively minor incidents, such as falling down the stairs at Victoria station (without major physical injury) or tripping when getting off a London bus, could trigger a severe mental breakdown. Another trigger not directly related to combat was marital infidelity.

The study of the Queen Square records dispels widely held beliefs about the outcomes of shell-shock patients. These include that shell shock was chronic and virtually untreatable (many patients recovered) and that patients were regularly classified as malingerers and sent back to the frontline (very few were). The Queen Square doctors (and eventually all British doctors) concluded that such cases would not be able to stand the strain of active service without relapsing and therefore recommended the vast majority of servicemen for discharge from their military duties. In all these cases, admission to Queen Square had a potentially life-saving function, preventing the return of the soldier to the trenches.

What about the German side?

When comparing the Queen Square records with those of an equivalent German institution, the psychiatric department of the Charité in Berlin, it becomes clear that hysterical fits (non-epileptic seizures) were much more frequent among German than British soldiers. This observation, which is supported by medical publications of the time, as analysed in my recent paper in Medical History, suggests that similar traumatic triggers can produce different clinical reactions in different cultural settings.

Epileptic seizures had already been recognised as a phenomenon of abnormal electrical activity in the brain before the war. Electricity was also the driving force behind the industrialisation and rapid modernisation of Berlin, the city which by the start of the 19th century had become the world capital of electrical engineering – and whose culture was dominated by the innovations of the electrical industry, from the cinema to the electric tramway. In this context, unleashing the forces of electricity in reaction to the shell shock may have been an almost natural, or at least understandable, way of dealing with the trauma.

The history of shell shock and other post-traumatic reactions clearly shows how cultural factors can shape the expression of trauma and distress. There are many cultural factors that might have influenced the way in which traumatised soldiers presented (some of which I discuss in my paper).

One important factor was the stigma that was (and still is) associated with psychiatric symptoms. The shame of suffering from a mental illness and the “taunt of having nothing to show” encouraged soldiers without obvious wounds to (subconsciously) express their trauma through physical symptoms. For doctors, who were well aware of the stigma of a mental diagnosis and its damaging effect on a man’s self-respect, it became usual practice to attach to traumatised soldiers the biological label of shell shock.

At the beginning of the last century, eminent French psychologist and psychotherapist Pierre Janet (a pupil of Jean-Martin Charcot, the oft-titled “founder of modern neurology”) had already asked:

This is still a relevant clinical question, not just in relation to combat stress, but for the huge field of so called “medically unexplained symptoms”. And historical research is likely to play a major role in future efforts to understand the mechanisms behind psychosomatic illness and reactions to adversity.

This work was supported by the Wellcome Trust (Ph.D. Studentship, Centre for the Humanities and Health, King’s College London).