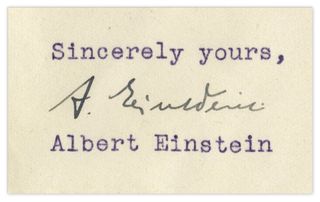 A letter penned by Albert Einstein during World War II was recently auctioned off in Los Angeles. Written in 1939, the letter speaks to the physicist's deep feelings of sympathy for the sufferings of the Jewish people under Nazi rule.

The letter, which Einstein wrote in 1939, was addressed to a hat merchant in New York who was involved in efforts to help European Jews escape the horrors of the Nazi regime. Throughout the 1930s, Einstein penned many letters like this one, congratulating others on their work to aid those affected by Hitler's genocidal policies. [Images: Missing Nazi Diary Resurfaces]

The contents of Einstein's letter don't reveal exactly what actions were taken by its recipient, Isidore Zelnikerof Bronx, New York. However, at the time the letter was written, many American Jews were involved in efforts to help Jewish refugees of the Holocaust in Portugal, France and other European nations.

Einstein — who was born to Jewish parents in Ulm, Germany, and later immigrated to the United States — was actively involved in efforts to persuade American and European policymakers to intervene on behalf of the Jewish people during World War II.

The renowned physicist also joined other American Jews in writing letters of recommendations for European Jews trying to obtain visas to enter the United States. Many of Einstein's personal letters regarding the plight of the Jewish people during World War II, as well as myriad other subjects, can be viewed online at the Einstein Archives Online website. Some of his writings can also be accessed online through the Shapell Manuscript Foundation.

In 2012, a letter that Einstein wrote to the German Jewish philosopher Eric Gutkind in 1954 went up for auction on eBay. In the letter, the physicist explained his personal views about God and organized religion, for which he seemed to have held little esteem. However, Einstein also expressed a deep-felt connection to his Jewish heritage, writing that he "gladly belong[ed]" to the Jewish people and that he had a "deep affinity" for their mentality. Dubbed the "God letter," the document eventually sold for just over $3 million to an anonymous online bidder.

But the public's fascination with Einstein doesn't end with his written word. In 2011, pieces of the genius's brain went on display at the Mütter Museum and Historical Medical Library in Philadelphia.

Lucy Rorke-Adams, a senior neuropathologist at the Children's Hospital of Philadelphia, donated the 46 slivers of brain tissue, each encased in microscope sliders, to the museum. Rorke-Adams had received the slides as a gift from another local doctor, who in turn had bequeathed them from his colleague, a neuropathologist who examined the slides on behalf of Thomas Harvey, the man who removed Einstein's brain during an autopsy in 1955.