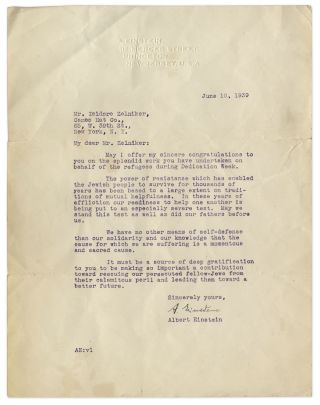 In 1939, renowned physicist Albert Einstein penned a letter to a businessman in New York, acknowledging the man's efforts to help Jewish refugees at the start of World War II. Now, 75 years later, that document is up for auction in Los Angeles.

The letter, typed on Einstein's personal stationary, is dated June 10, 1939, and was sent from the scientist's residence on Mercer Street in Princeton, New Jersey, to Isidore Zelniker, a Jewish hat merchant in midtown Manhattan.

The historical document is expected to fetch at least $10,000, according to Nate D. Sanders Inc., the auction house handling the sale. Bids for the online auction will close today (Nov. 20) at 5 p.m. PT (8 p.m. ET). [Creative Genius: The World's Greatest Minds]

At the time the letter was written, Einsteinhad been living in Princeton for six years, and was serving as a professor of theoretical physics at the Institute for Advanced Study. Previously, Einstein lived in several European countries, including Italy and Switzerland, but he moved to the U.S. in 1933 from Berlin — the same city where Adolf Hitler had recently been elected chancellor.

Considering Einstein was born to Jewish parents in Ulm, Germany, the timing of his departure was no coincidence. After escaping the horrors of the Nazi regime with his family, Einstein never stopped advocating for those he referred to as his "Jewish brethren" in Europe.

When he wasn't revolutionizing the world of physics, Einstein worked to help Jewish refugees escape the Nazis and tried to persuade political leaders in the United States and Europe to take action to help the Jewish population. He wrote countless letters thanking those who were involved in the effort to help imperiled Jews. The letter now up for auction is just one example.

''My dear Mr. Zelniker: May I offer my sincere congratulations to you on the splendid work you have undertaken on behalf of the refugees during Dedication Week. The power of resistance which has enabled the Jewish people to survive for thousands of years has been based to a large extent on traditions of mutual helpfulness. In these years of affliction our readiness to help one another is being put to an especially severe test. May we stand this test as well as did our fathers before us. We have no other means of self-defense than our solidarity and our knowledge that the cause for which we are suffering is a momentous and sacred cause. It must be a source of deep gratification to you to be making so important a contribution toward rescuing our persecuted fellow-Jews from their calamitous peril and leading them toward a better future.''

In 1939, when Einstein wrote this letter, Europe was in turmoil. Hitler was just months away from invading Poland — an action that would result in the United Kingdom's official declaration of war. But the Nazis' persecution of minority groups had been ongoing since Hitler's rise to power in 1933, according to the Jewish Virtual Library.

Between 1939 and 1940, more than half of all immigrants to the United States were Jewish, most of them refugees fleeing persecution in Europe, according to the United States Holocaust Memorial Museum. However, those applying for visas — both to the U.S. and other countries — had to be sponsored by two citizens of that country, preferably a relative. The congratulations that Einstein offered to Zelniker in his letter may have something to do with the merchant's sponsoring of European Jews, though this is just a guess. The letter could also be referring to the work done by various Jewish organizations in the U.S. to support refugee efforts in countries such as Italy and Portugal.

Several letters composed by Einstein in the 1930s can be viewed online at the Shapell Manuscript Foundation. More information about the auction can be found at the Nate D. Sanders website.