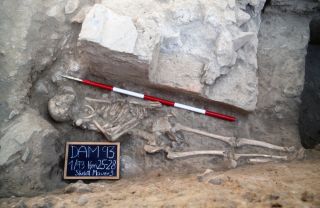 A 2014 study has analayzed the skeletal remains of ancient gladiators and found that the Roman warriors drank an beverage filled with ash and vinegar. Here, the skeleton of one of the gladiators unearthed in Ephesus, Turkey
(Image: © Wolfgang Pietsch / ÖAI)

Long before modern athletes recharged with post-workout drinks, ancient gladiators may have guzzled an ash-filled beverage laden with electrolytes — a Roman-era equivalent of a sports drink.

The skeletal remains of gladiators unearthed in a cemetery in Ephesus, Turkey, suggest the fighters may have drunk a beverage made from ash, vinegar and water.

The new analysis, which was detailed online Oct. 15 in the journal PLOS ONE, also casts doubt on the notion that the fighters ate a special gladiator diet, as historical documents suggest. The gladiators' mostly vegetarian fare wouldn't have been much different from the diet of the general population, said study co-author Fabian Kanz, a forensic anthropologist at the Medical University of Vienna in Austria. [See the Gladiator Bones and Burial Site]

In 1993, archaeologists surveying the holy procession path between the Temple of Artemis (one of the Seven Wonders of the Ancient World) and the city of Ephesus, Turkey, uncovered a mass burial pit not far from an ancient gladiator stadium. The pit contained the battle-scarred bones of 68 people who had died between the second and third centuries.

The cemetery also contained some gladiator gravestones depicting battles, and most of the skeletons belonged to men between the ages of 20 and 30, according to a 2006 article in the journal Forensic Science International.

Gladiators — who were typically prisoners of war, condemned men or slaves — usually lost all right to a proper burial, but it's possible the owner of the local gladiator school had purchased or rented this plot for his students, Kanz speculated.

So Kanz and his colleagues took a closer look at the bones from Ephesus.

The team analyzed the skeletal fragments' ratio of carbon, sulfur and nitrogen isotopes (atoms of the same element with a different number of neutrons). (Because different plants and animals contain different ratios of these isotopes, their ratios in bones can reveal the long-term dietary patterns of ancient people.)

The gladiator bones showed low levels of the isotope nitrogen-15, which is typical of a diet high in nitrogen-fixing plants, such as lentils and beans. Even so, the gladiators' diet probably wasn't all that different from the mostly vegetarian fare eaten by the Roman populace, Kanz said.

Because the chemical signals of a diet can take years to appear in the bones, however, it's possible that the gladiators did eat a different diet — but simply didn't live long enough after entering the deadly profession for that chemical signature to show up in their bones, he said.

The team also analyzed the ratio of the elements strontium and calcium in the bones. Strontium is readily taken up from the soil by plants, but is removed from the body by animals that eat those plants or other animals, Kanz told Live Science. However, a strontium atom will occasionally replace a calcium atom in the bones, so planet eaters and those eating lower in the food chain will have higher levels of strontium, Kanz added.

The team found that the gladiators had almost twice the ratio of strontium to calcium in their bones, as did other populations, even though they ate a very similar diet.

That led the researchers to speculate that the gladiators were guzzling a post-battle drink described in ancient texts: a mixture of vinegar, water and ash. The ash, which Romans typically added to food for a smoky flavor and even used for medicinal purposes, would have provided an extra heaping of strontium, Kanz said.

"They didn't have coffee; they didn't have tea," Kanz told Live Science. "But they had wine, and then they drank a mixture of vinegar and water. It's not as horrible as it sounds."