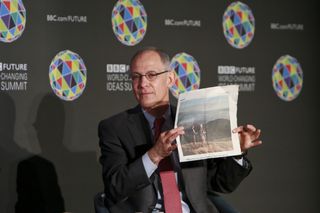 NEW YORK — Shortly after he took the stage at the BBC Future's World-Changing Ideas Summit here in Manhattan, Dr. Ezekiel Emanuel held up a full-page AARP ad from a newspaper. It featured a picture of an older couple hiking above a line of text that read, "When the view goes on forever, I feel like I can, too. Go long."

Emanuel famously does not want to go long. Last month, he published an article in The Atlantic, provocatively titled "Why I Hope to Die at 75," and on Tuesday (Oct. 21), he explained why he doesn't buy the bill of goods that organizations like AARP are trying to sell.

Emanuel doesn't plan to ask his physician for euthanasia on his 75th birthday. In fact, he strongly opposes legalizing euthanasia and assisted suicide. But in 18 years, Emanuel, now 57 years old, said he will stop going to the doctor and cease taking medications such as statins and antibiotics that could prevent life-threatening illness; he'll only accept palliative care. [8 Tips for Healthy Aging]

Emanuel is an oncologist and bioethicist at the University of Pennsylvania, and was one of the key architects of the Affordable Care Act (dubbed Obamacare). He's also the brother of Chicago mayor Rahm Emanuel and Hollywood agent Ari Emanuel.

Seventy-five, he said, was a "slightly random number," but he picked that age by looking at the data on the rates of physical and mental disability, as well as studies on how creativity and productivity decline in old age.

Emanuel said he doesn't want to run the risk of getting dementia, involuntarily drooling, living in a nursing home or imposing a burden on his family. The bioethicist said he wants his grandkids to remember him as vigorous, not incapacitated. And he said he doesn't believe there has been a "compression of morbidity," or a decrease in the amount of time people spend suffering from chronic illness as they live longer.

"As we add more years of life, we're adding more years of disability," Emanuel said. "That just doesn't strike me as a great deal, and not the kind of deal I think most people have in mind when they are thinking about the future."

Emanuel's essay in The Atlantic sparked a variety of strong reactions. A columnist for the Los Angeles Times called Emanuel's views "inhumane." Slate suggested Emanuel was "elitist" for implying that people cannot be valuable in society unless they're being productive in some meritocratic way. Another writer for The Washington Post took Emanuel's article as an occasion to reflect on his optimism for what the future holds as he watches his parents slow down.

But at Tuesday's summit, Emanuel insisted the essay was not a prescription for anyone else — nothing more than a challenge to others to come up with a personal definition of a good, meaningful life. He said he doesn't think most people will conclude that a meaningful life is necessarily a long one.

In terms of policy, however, Emanuel did say he would like to see some attention diverted away from extending the lives of the old, and focused more toward the problems of infant mortality, pre-term births and adolescent mortality — areas where the United States lags compared to other developed countries. Emanuel also said doctors and nurses need better training to talk about death and end-of-life care with their patients. And in general, he said Americans need to start having those uncomfortable, existential conversations amongst themselves. He said the obsession with trying to live as long as possible suppresses the question: What are you going to do with your life?

"The reason I wrote the article was to try to provoke conversation," Emanuel said. "To make people think about what's valuable in their lives. We don't do this easily. It is scary. But what could be more important?"