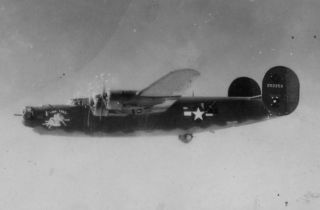 The heavy bomber Consolidated B-24 Liberator, known by its crews as the “Flying Coffin.”
(Image: © Mario Di Sorte)

A forgotten story of death and survival during wartime has been brought to light after 70 years as local people unearthed the remains of an American World War II aircraft known as the “Flying Coffin.”

Found in the forests of Selva del Lamone, a natural reserve near the town of Farnese, Viterbo, in central Italy, the wreck remains were identified as belonging to the heavy bomber Consolidated B-24 Liberator.

B-24s are recorded as having dropped over 630,000 tons of bombs during World War II and were the most heavily produced American aircraft.

The four-engine aircraft was notorious among aircrews. Officially designated the “Liberator,” the square shaped B-24 could easily turn into a death trap. It was hard to fly with its stiff and heavy controls, and so earned its name by its crews as the “Flying Coffin.”

Liberators had only one exit near the tail, making it almost impossible for the crew to reach the rear from the flight deck when wearing a parachute.

According to historian Mario Di Sorte, the wreckage fragments found in Selva del Lamone belong to a B-24 ‘H’ model that operated within the 15th Air Force, 454th Bomb Group, 736th Bomb Squadron from San Giovanni, near Foggia in southern Italy.

The B-24H took off from San Giovanni on March 3, 1944 for a bombing mission to Canino airport, south west of Lake Bolsena. It was one of the 277 bombers — all B-17 “Flying Fortress” and B-24 Liberators — taking off from airfields in Puglia to bomb bridges, train stations and airports controlled by the Germans.

The B-24H was part of an 18-bomber formation that dropped some 25 tons of bombs on the Canino airport, where the Focke Wulf 190 fighters led by German Luftwaffe flying ace Erich Honagen operated.

“Weather conditions and clouds prevented accurate bombing. Only half of the bombers actually dropped their loads, in many cases missing the main target area,” Di Sorte said.

They were the only survivors of the “Flying Coffin.”

The B-24H exploded before crashing. It split in three parts, leaving the Italian civilians who came to the crash site with a horrifying scene of death.

“Carbonized bodies were scattered around the wreckage, a body was hanging from a tree with his parachute, while lieutenant William J. Goodwin was seen laying on the ground wearing the oxygen mask with bandages stuffed inside,” Di Sorte said.

Seriously injured, sergeant Cleveland parachuted away from the crash and was captured by the Germans, ending up in a prison camp in Germany.

Sergeant Ashby was helped by the local family Sabatini along with two South African soldiers. They had escaped from a prison camp in Italy and were hiding themselves in caves owned by the Sabatinis.

While Asby was later captured by the Germans, also ending up in a prison camp, the South African soldiers met a terrible fate.

“Bobby” Robert Carter of the South African Engineer Corps and “Alfred” F.J.Crinall of the Rand Light Infantry South African Forces were arrested in the town of Farnese by the Germans on June 4, 1944.

“They were tortured for two days, forced to dig their own pit and then shot dead,” Di Sorte said.

The wreckage fragments will go on display in the Selva del Lamone natural reserve by the end of the year. Along with commemorative panels, they will recount the story of the American and South African soldiers.