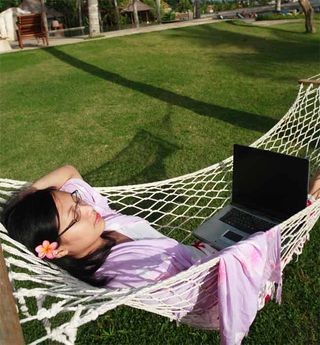 Woman lounging in a hammock while working on a laptop.
(Image: © Dreamstime.com)

Weekend getaways and romantic dinners used to be sweet escapes from the daily grind. Nowadays, R and R is often interrupted by a buzzing Blackberry or the ding of an instant message on the wireless laptop.

That's not news to modern workers, many of whom may just be getting back from a long winter break during which they worked more than in years past.

An AP poll last year found that one-fifth of Americans tote a laptop on vacation. Countless more carry cell phones, many of which can be used to check company e-mail.

And why not? With wireless coverage extending, staying connected is simple. Recently, JetBlue Airways announced a trial of free e-mail and instant messaging services for passengers on one of its aircraft. Other airlines are expected to follow suit.

But there's a hidden cost to companies: employee burnout.

"Using work cell phones and checking company e-mail at the poolside is not a vacation," said Dov Eden, an organizational psychologist at Tel Aviv University. Eden studies the psychological effects of respites ranging from family trips to lengthy sabbaticals, including how they bring relief from chronic job stress.

"If I were a manager, I would insist that my employees leave their cell phones at work during vacation and not check their e-mail while away," Eden said. "In the long run, the employee will be better rested and better able to perform his or her job because true respite affords an opportunity to restore depleted psychological resources."

A nine-year study of more than 12,000 middle-aged men at high risk of heart disease showed that participants who vacationed more had a lower risk of dying than the vacation-deprived. The study, conducted by Brooks Gump of the State University of New York-Oswego and a colleague, was published in 2000 in the journal Psychosomatic Medicine.

Americans, however, are passionate connoisseurs of stress.

In a nationwide survey conducted this year by the American Psychological Association, nearly half of the 2,000 adult respondents said stress has increased in the past five years, with 75 percent ranking money and work as the leading causes of stress.

Seventy-seven percent reported physical symptoms related to stress, including fatigue, less interest in sex and even teeth grinding, while 73 percent indicated psychological symptoms such as irritability and wanting to cry at times.

Women, in particular, need more time off. A study in 2005 found that 42 percent of American women "get away from it all" less than once a year.

One way to beat work stress could be to work from home or another remote location.

Research published in a recent issue of the Journal of Applied Psychology and based on a review of nearly 50 studies that involved about 13,000 employees suggests this alternative work arrangement is a win-win set-up.

"Our results show that telecommuting has an overall beneficial effect, because the arrangement provides employees with more control over how they do their work," said lead author Ravi Gajendran of Penn State.

An estimated 45 million Americans telecommuted in 2006, up from 41 million in 2003, according to WorldatWork, a not-for-profit professional association that focuses on work-life balance and workplace benefits.