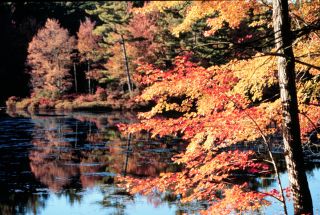 As a result, today's forests would baffle a Brachiosaurus. Most of the slow-growing trees and shrubs munched by dinosaurs are minor players in modern forests, because the plants couldn't adapt to post-impact climate swings, researchers report today (Sept. 16) in the journal PLOS Biology.

"When you look at forests around the world today, you don't see many forests dominated by evergreen flowering plants," lead study author Benjamin Blonder said in a statement. "Instead, they are dominated by deciduous species, plants that lose their leaves at some point during the year."

Dinosaurs stomped through forests ruled by evergreen angiosperms, which never drop leaves. Angiosperms are flowering plants, grasses and trees, excluding conifers like spruce and pine. The dinosaur-era angiosperms included ancient relatives of holly, rhododendrons and sandalwood. Other plants in the ancient forests included beeches, cycads, gingkoes, ferns and palm trees. [See Photos of a Fossilized Forest in the Canadian Arctic]

Fossil records show that angiosperms of all kinds thrived before a meteorite or asteroid crashed into Earth 66 million years ago. That stupendous blast charred vast woodlands that had grown from Canada to New Mexico. In North America, about 60 percent of plant species went extinct, according to earlier studies.

After the blaze, deciduous angiosperms, which drop their leaves seasonally, bounced back much better than the evergreens.

Blonder, an ecologist at the University of Arizona in Tucson, wanted to know why the deciduous angiosperms outcompeted their evergreen cousins during the cold, dark years after the impact (called an impact winter). The researchers pored through thousands of prehistoric leaves from Wyoming's Hell Creek Formation. The fossilized leaves spanned the impact, from the last 1.4 million years of the Cretaceous Period through the first 800,000 years of the Tertiary Period.

Based on their analysis, the researchers said the properties of the plant leaves likely helped them withstand the bleak climate. The impact winter pushed ecosystems toward plants with faster growing strategies, Blonder told Live Science in an email interview. "Leaves represent a drain on a plant's resources when photosynthesis can't occur. Thus, deciduous species should be favored over evergreen species," he said.

The researchers analyzed leaf mass per area, which indicates how much carbon a plant invests in growing a leaf. "[This] tells us whether the leaf was a chunky, expensive one to make for the plant, or whether it was a more flimsy, cheap one," Blonder said. The scientists also looked at leaf vein density, a measure of how fast a plant takes up carbon.

"Our study provides evidence of a dramatic shift from slow-growing plants to fast-growing species," Blonder said. "This tells us that the extinction was not random. And, potentially, this also tells us why we find that modern forests are generally deciduous and not evergreen."