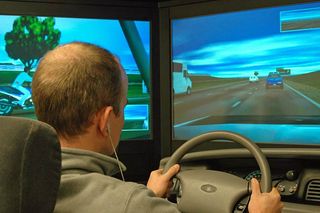 Joel Cooper, a University of Utah doctoral student in psychology, demonstrates how subjects in a new study talked on a cell phone while operating a driving simulator. The new Utah study found that motorists on cell phones contribute to traffic congestion because they drive slower and are less likely to pass slow-moving vehicles.
(Image: © Ivana Vladisavljevic)

Motorists using cell phones are known to drive like drunks, but their overall effect on traffic flow was uncertain until now.

"At the end of the day, the average person's commute is longer because of that person who is on the cell phone right in front of them," said Dave Strayer, a University of Utah psychologist and leader of the research team. "That S.O.B. on the cell phone is slowing you down and making you late."

Strayer and his colleagues detail their findings in a study to be presented Jan. 16 at the Transportation Research Board's annual meeting.

"If you talk on the phone while you're driving, it's going to take you longer to get from point A to point B, and it's going to slow down everybody else on the road," said Joel Cooper, a University of Utah psychology doctoral student who assisted with the study.

Earlier studies showed that cell phone users follow at greater distances, are slower to hit the brakes and are slower to regain speed after braking. The new study used a driving simulator with realistic traffic scenes projected onto screens around drivers.

Participants were told to obey a 65-mph speed limit and use turn signals, but were left to decide their own speeds, following distances and lane changes.

"We designed the study so that traffic would periodically slow in one lane and the other lane would periodically free up," Cooper said. "It created a situation where progress down the road was clearly impeded by slower moving vehicles, and a driver would benefit by moving to the faster lane, whether it was right or left."

In medium- and high-density traffic, drivers talking on cell phones were about 20 percent less likely to change into the freed lane, drove an average of 2 mph slower and took 15 to 19 seconds longer to complete a 9.2-mile freeway course.

The numbers may seem easy to ignore, but the researchers said the effect cascades and gums up traffic.

"If you have a lot of people who are not changing lanes and driving slower, this could substantially reduce traffic flow," Cooper said.