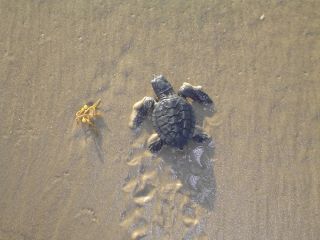 Wayne Pacelle is the president and chief executive officer of The Humane Society of the United States (HSUS). This Op-Ed was adapted from one that appeared on the HSUS blog ;A Humane Nation. Pacelle contributed this Op-Ed to Live Science's Expert Voices: Op-Ed & Insights.

In true Hollywood style, the success of "Teenage Mutant Ninja Turtles" has produced plenty of hype about turtles and tortoises. But unlike the reptilian heroes Leonardo, Raphael, Michelangelo and Donatello, real-life turtles and tortoises move at a slower pace and are not quite so aggressive. While these wild creatures do not have to face antagonists like Shredder, they do face enormous challenges, including real-life enemies who intentionally drive over them on roadways or, out-of-site-out-of-mind, bury them under housing development projects.

There are many threats faced by turtles and tortoises in America's ponds, rivers, oceans, beaches, deserts and other habitats today, such as:

Here at The HSUS, we work every day to save turtles and tortoises, and to face the challenges enumerated above. Until recently, Florida allowed gopher tortoises to be killed — often buried alive — for construction projects. Gopher tortoises live in underground burrows that are four to 40 feet long and in the past developers did not have to remove the tortoises and could buy “bury permits” to continue with construction. The HSUS now works with developers who have these grandfathered permits and we give them a humane alternative to dig out the turtles and rehome them to sanctuaries. Recently, we carried out such a dig at a construction site in Apopka, Fla. [Gopher Tortoises Rescued From Construction Site | Video]

Our wildlife centers also often assist in the rescue and rehabilitation of turtles. The Cleveland Amory Black Beauty Ranch, an East Texas sanctuary run by The HSUS and its affiliate, Fund for Animals, houses more than 1,200 animals rescued from abusive or exploitative situations. On site, we have one resident alligator snapping turtle, three sulcata tortoises and one African leopard tortoise (all former pets), and hundreds of native red-eared sliders in ponds.

And earlier this month, we received the good news that Montana now prohibits the import, sale and ownership of red-eared sliders — an accomplishment is 3 years in the making and is a direct result of too many pet turtles being released into Montana waterways.

With the closing of the federal Desert Tortoise Convention Center in Nevada because of federal budget cuts, the U.S. Fish and Wildlife Service has asked us to help re-home special-needs tortoises who cannot be released back into the wild. The HSUS is helping to find homes for 400 such tortoises that need a safe place to live for the remaining 10 to 80 years of their captive lives.

Turtles are alluring creatures , but it is important to remember that they belong in the wild. We hope that the success of "Teenage Mutant Ninja Turtles" will not result in a mass movement to acquire turtles as novelty pets. Instead, the film should inspire more Americans to become aware of turtles' needs. We must all safeguard the habitats for these creatures that move at their own pace and whose protective shell is no match for the array of threats humans throw at them.

Pacelle's most recent Op-Ed was "Are U.S. Pet Lovers Divided, Red State vs. Blue?" The views expressed are those of the author and do not necessarily reflect the views of the publisher. This Op-Ed was adapted from "Turtle Diaries, Tortoise Travails" on the HSUS blog A Humane Nation. This version of the article was originally published on Live Science.