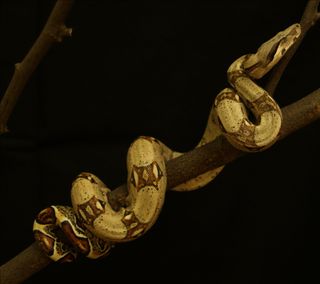 A boa constrictor slithers up a tree.
(Image: © Bruce Jayne, University of Cincinnati)

Some snakes seem to be little scaredy-cats, as new research finds when climbing trees, they hold on for dear life.

The study researchers found snakes use a much greater force to grip tree trunks and other surfaces they're climbing than is necessary. The finding suggests the reptiles prefer to play it safe rather than conserve energy, researchers say.

Compared with moving horizontally on flat land, climbing up a vertical or inclined surface is difficult for animals. The key to this motion is finding a way to prevent the body from slipping as gravity pulls down, and different animals have solved this problem in different ways.

For example, numerous mammals use their claws to cling to trees, while some lizards and tree frogs simply adhere to surfaces using specialized toe pads, which contain tiny hairs that produce a short-range electrostatic force (called a van der Waals force) with a surface's molecules. But humans and other animals lack these adaptations, and can only hold on via friction generated by muscle forces.

Snakes also use friction to climb steep surfaces; more specifically, they alternate between contracting and extending their bodies in a motion called concertina locomotion. "Basically, part of the body will have a static hold on whatever they are gripping, and the other part of the body will extend forward," said Greg Byrnes, an integrative biologist at Siena College in New York. "It's like an accordion that's opening and closing."

Until now, nobody knew just how much muscular force snakes use while climbing a surface with concertina locomotion, Byrnes told Live Science. So he and his colleague, Bruce Jayne of the University of Cincinnati in Ohio, decided to find out.

The pair constructed a vertical cylinder covered in a textured tape (necessary for friction), and placed several pressure sensor strips on the cylinder. Next, they measured the forces that 10 snakes from five species — boa constrictors, brown tree snakes, carpet pythons, green tree pythons and a smaller python — used as they climbed the cylinder, 10 times each. [Watch a Carpet Python Climb a Tree While Gripping Tightly]

This calculation involved placing the snakes on a flat board covered with the textured tape, and then raising the board until the snakes started slipping. The angle of inclination allowed them to figure out the "coefficient of friction" between the snakes and the surface, which is related to how much force the snakes must produce to support their body weight, Byrnes said. Their calculations also accounted for the equal and opposite downward force that's produced by the snakes' upward motion while climbing.

The researchers thought the snakes might take the economical approach and use as little force as possible to hold on to the cylinder. After all, climbing is energetically costly, and some snakes can control their muscular forces, at least while constricting prey. But this isn't what they found.

Sometimes, the snakes' "safety factor" was close to 1, meaning the reptiles were using nearly the minimum force required to grip the cylinder and not slip. Other times, the snakes' safety factor was almost 20, which is about the same amount of force seen during prey constriction, and 20 times the force needed to avoid slipping. [In Photos: How Snakes Climb Up Trees]

"The vast majority of time, the safety factor was between 2.5 and 5," Byrnes said. "They are using a force that's not at their maximum, but not at their minimum, either."

It's a bit unclear why the snakes, on average, use up to five times the force they actually need to climb. It may be that arboreal (tree-living) snakes move so infrequently that their energy expenditure while climbing has little overall impact on their lives, the researchers suggest.

Or perhaps the benefits of playing it safe simply outweigh the energy costs. Though the topic hasn't been explored much, choosing safety over economy may be more common in the animal kingdom than thought, Byrnes said.

Research shows that the large adhesive forces geckos and anoles use to climb is about 10 times greater than what's necessary to support each animal's body weight. And though the gripping forces people use while climbing ropes or rock walls hasn't been studied, research suggests people use two to four times the necessary force to hold on to objects, Byrnes said.

For instance, does a gazellerun at its maximum speed when it's being chased? And how far does an animal choose to jump when it has to cross a gap? "There are lots of different systems where those safety factors lie," Byrnes said. "It's a really understudied field of research."

Byrnes and Jayne detailed their work today (Aug. 19) in the journal Biology Letters.