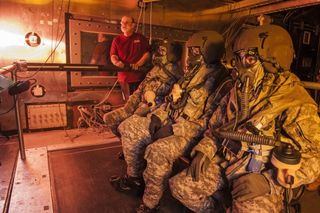 Military aircrews may no longer have to choose between staying safe and staying cool. The U.S. Army's new personal cooling systems, worn underneath body armor, can help troops beat the heat, without removing their protective gear.

Soldiers can wear the Light-Weight Environmental Control System, or LWECS, directly against their bodies. A small battery that fits inside body armor powers the system, according to the U.S. Defense Department (DoD).

"It's the same technology that's in your air conditioner or in your refrigerator, except instead of conditioning air, it chills a fluid. And then it pumps that fluid through a tube-lined cooling vest," Brad Laprise, a mechanical engineer at the Natick Soldier Research, Development and Engineering Center (NSRDEC) in Natick, Massachusetts, told Armed with Science, the DoD's science blog. [7 Technologies That Transformed Warfare]

The cooled fluid travels through approximately 110 feet (34 meters) of tubing coiled inside the vest, which is worn against the skin. Though the unit that cools the fluid is small, measuring only 3.5 inches (9 centimeters) across, it provides 120 watts of cooling power, about the same as a small refrigerator, according to Laprise.

Helicopter pilots and their crews already use aircraft-mounted cooling systems to beat the heat. But while these systems have been shown to improve endurance and performance levels in hot climates, many crewmembers avoid using them because they tend to be inconvenient.

Such onboard cooling devices are equipped with tethers that soldiers need to attach themselves to in order to cool down. But moving around the back of a cramped helicopter on a tether is no easy feat, the researchers said. The new, tether-free system is expected to resolve this and other issues associated with staying cool mid-flight.

To gauge the effectiveness of the new system, researchers from the NSRDEC and the U.S. Army Research Institute of Environmental Medicine recruited five volunteers to try out the cooling devices at NSDREC's climate chambers.

The volunteers were outfitted in full protective gear, including an over-garment, a mask, a hood, footwear covers and gloves, in addition to the soldiers' standard field gear, or uniform.

Inside the climate chamber, the five participants paired up to simulate air missions in desert and jungle conditions. One soldier in each pair wore the LWECS system during the trials.

To simulate typical air missions, in which crew members repeatedly exit and board the aircraft, the participants sat for 50 minutes and walked for 10 minutes each hour. Each session lasted 11 hours.

During this time, researchers monitored the participants' core and skin temperatures and heart rate, as well as fluid intake and bodily excretions. While researchers are still shifting through the data from the tests, early results indicate that the cooling system works well.

"Physiologically, we're seeing that their body core temperatures are lower, their heart rates are lower," said Bruce Cadarette, a research psychologist at the U.S. Army Research Institute of Environmental Medicine. The results suggest that the cooling system does what it was designed to do, he said.

The researchers created the new system with specific military personnel in mind, particularly aircrew chiefs, who are responsible for loading and unloading cargo, Cadarette said. These men and women need a cooling system that lets them do their job without being hampered by tethers.

"The other people that we're concentrating on are the medics, who have to fly out in the back of helicopters, and who have to go out and treat wounded in the field, load them onto stretchers [and] get them onto the back of the helicopter," Cadarette said. He said he expects U.S. air troops in both desert environments and tropical climates will eventually use the lightweight system.