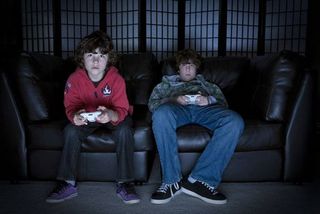 Whether it's an explosion, a scream or a voice saying, "go, go, go," some video gamers continue to hear sound effects long after they have stopped playing, a new study finds.

Psychology researchers surveyed more than 1,200 people through online gaming forums who said they had experienced hallucination-like perceptions, thoughts and behaviors after gaming. Of this group, 12 percent reported hearing imaginary sounds after playing video games, according to study, published in the latest issue of the International Journal of Cyber Behaviour, Psychology and Learning.

Sometimes this small group of gamers thought their "auditory experiences" were real. They reported hearing cars, lasers, bullets, explosions, swords, screams, falling coins, ringing, beeping and breathing. One gamer heard a voice whispering "death." Another told the researchers he heard the words "go, go, go" in his head when he wanted people to move in the subway. Often, these imaginary noises were triggered by real-life objects or events that resembled something in the game. [The 16 Oddest Medical Case Reports]

"Objects and events simulated in the game have become what I like to call 'evocative objects' that trigger responses that have been conditioned, such as emotions, sensations, perceptions and involuntary body movements," said the study's lead author, Angelica Ortiz de Gortari, of Nottingham Trent University in England. "The gamers' minds are completing the missing pieces in the puzzle, and they hear and see what they have expected to see due to the game play."

Scientists have been studying these kinds of experiences, now known as "game transfer phenomena," for almost as long as video games have been around. In one of the earliest cases, in 1993, a researcher detailed the plight of a woman who was haunted by the music of Super Mario Brothers. (The author at the time described this as "Nintendo hallucination" in his article in the Irish Journal of Psychological Medicine.) The researchers of the new study previously found that some gamers "see" images from video games after playing, such as power bars above people's heads.

In the new study, the researchers found that auditory replays were most common after long gaming sessions, and happened during everyday activities, including walking and driving. In some cases, these experiences kept gamers up at night. A few told the researchers these sounds were "scary," "annoying," "disconcerting," or made them feel like they were "going crazy."

But the findings aren't necessarily an indictment on video games with intense auditory stimuli, and for most gamers, these noises shouldn't be a cause for concern. If these experiences cause people to question their own mental health, develop irrational thoughts or experience distress, then it is important to seek help, Ortiz said. But she told Live Science that she's had many gamers contact her to thank her for showing them that their experiences are not uncommon and that they're not going crazy.

Mark Griffiths, who was a co-author of the study, said that game transfer phenomena seem to be common among excessive gamers, "and most of these phenomena are short-lasting, temporary and resolve of their own accord."

"For some gamers, the phenomena are conditioned responses, therefore the best way for the tiny minority that may have longer-lasting phenomena is to simply cut down the amount they play," Griffiths said in a statement.

Editor's note: This story was updated on Monday (Aug. 4) at 3:50 p.m. ET to include comments from the lead researcher.