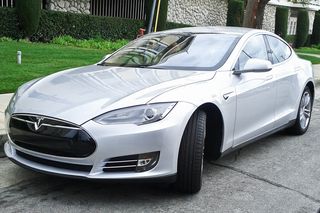 Battery costs can make up a quarter of the cost of an electric car such as this Tesla Model S.
(Image: © Shal Farley/Flickr, CC BY-SA)

At the heart of the current debate around energy is the question of storage. In cars, how to build batteries that run for hundreds of kilometres; in electricity, storing energy from solar panels for when the sun doesn’t shine.

Our analysis shows that the past very high storage costs are now rapidly falling. This suggests that the financial appeal of electric cars and stationary storage is set to keep increasing considerably in years ahead.

First introduced by Sony in 1990, lithium-ion batteries are already the dominant type of battery for technologies such as mobile phones, laptops and electric cars, and are expected to remain so for some time. Their strength lies in being able to store a high amount of energy in a relatively small and lightweight package, as well as being capable of charging and discharging thousands of times while retaining most of their storage capacity.

How much do batteries cost?

The uptake of most new technologies is initially limited by high costs. This also seems to be the case for the uptake of electric vehicles in Australia.

Batteries represent a substantial proportion of the cost of electric vehicles. For example, just the individual battery cells in the Californian Tesla Model S electric car make up 25% or more of the vehicle purchase cost.

As a result, battery costs are a key factor in whether or not, and when, certain technologies find widespread adoption. However, information on battery costs is not easily accessible. The price of batteries depends significantly on the volume ordered. For large orders, this price is set on a case-by-case basis.

Neither battery cell manufacturers nor corporate buyers of batteries tend to disclose the specific content of the deals they strike. As a result, outsiders have difficulty gaining an accurate insight into costs. The best available sources are reports by research institutes and consultancies that directly communicated with major players in this field.

To shed some light on battery cost trends, as part of a joint project between the University of Melbourne and IBM Research - Australia, we have conducted a meta-analysis of current battery costs and future cost predictions. The graph below shows the cost trends for full battery packs, which contain the battery cells themselves, battery management electronics, a cooling system, and protective housing.

The analysed studies (links at end) focus specifically on battery packs for automotive markets. However, the battery packs for other large applications, such as domestic systems used to store energy from solar panels for evening use, are very similar so the results have implications far beyond the automotive domain.

The results indicate that battery pack costs per kilowatt-hour have been decreasing rapidly, from an average cost of around US$800 in 2009 to around US$600 this year. Furthermore, this decreasing trend is expected to continue, with battery system costs predicted to drop to around US$310 by 2020 and further to US$150 by 2030.

However, there are significant differences in the estimates, particularly regarding current costs and those until 2020. If these correspond to differences in specific deals struck, they could well be the determining factor for economic success of the corresponding battery purchasing companies.

To put the numbers into perspective, one kilowatt-hour of storage offers sufficient energy to travel approximately 6km in an electric car, or 120km on an electric bicycle. While the battery of an electric car capable of driving 200km would have cost around US$28k in 2009 and US$22k today, the cost is expected to drop to US$11k by 2020 and around US$5k by 2030.

In addition to the initial cost, it is important to consider that despite presently high electricity prices in Australia, the cost of fully charging a 200km-electric car is only around AU$8. Assuming petrol prices keep rising as they have in recent years, it seems very likely that for many people electric cars may soon offer clear economic benefits over petrol cars.

Beyond transportation there are many other fields that are directly impacted by reducing battery cost.

Rooftop solar storage, for example, can benefit greatly by being able to store surplus energy generated during the day for use later in the evening. In addition to the personal satisfaction that comes from knowing that your own roof is powering your evening energy needs, there are also financial benefits.

For example, a typical Victorian customer with rooftop panels will earn around 8₵ for feeding one kilowatt-hour into the grid during the day, but pay 33₵ to buy back the same amount in the evening.

Consider this analogy: You have an apple tree that drops a fresh apple every afternoon. But you rarely fancy eating apples in the afternoon and you also don’t have a fridge to store it on hot days, so you sell it to your neighbour to keep it from going to waste. Then most evenings you fancy eating an apple, so you buy one back from your neighbour. The “catch” is that you sell the apple for $1 but buy one back only a few hours later for $4, i.e. at a substantial loss.

Investing in a stationary battery system is the equivalent of buying a fridge. Both items have a big upfront cost, but once bought, mean you never again have to lose money on a daily basis by trading something that you will require only a few hours later.

As lithium-ion battery costs continue to decrease, the opportunities to reduce on-going transportation and electricity costs become ever more positive. And the environmental benefits offered by solar generation and electric cars alike suggest that batteries, as the ticking hearts of these green technologies, may well turn users’ own hearts just a little bit greener.

Full titles of the reports analysed can be found here.

This article was co-authored by Arun Vishwanath (research scientist) and Shivkumar Kalyanaraman (chief scientist) at IBM Research - Australia.  Valentin Muenzel, of the University of Melbourne, receives funding from the Australian Research Council via a linkage grant. He also provides consulting services on the topic of batteries to several companies.

Iven Mareels, of University of Melbourne, receives funding from The Australian Research Council, under the Linkage Grant Scheme, in support of research on the integration of electric vehicles into the grid.

Julian de Hoog, of University of Melbourne, receives funding from the ARC, Better Place Australia, and Senergy E-Connect as part of a linkage grant.